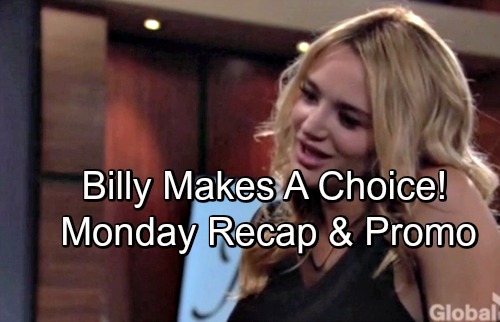 The Young and the Restless (Y&R) spoilers and recap for Monday, July 30, tease that Mariah (Camryn Grimes) will get updates on Hilary’s (Mishael Morgan) death. After Sharon (Sharon Case) offers comfort, Mariah will decide she has to do something special. She’ll think she needs to make a very Hilary-ish gesture.

Once Mariah takes off, Sharon will talk to Nick (Joshua Morrow) about his black eye. He’ll insist that Billy (Jason Thompson) punched first. Nick won’t regret trying to beat some sense into him. Moments later, Sharon will discover Mariah’s packed bag. She’ll be stunned to find a one-way ticket to Sante Fe inside. Sharon will fear the worst, so she’ll rush off to stop her daughter.

Later, Devon will fill Shauna (Camryn Hamm) in on Hilary’s demise. He’ll promise that she still has a home with him. Mariah will drop by soon after with news of her upcoming tribute to Hilary. She’ll want to put on the best show possible for her friend. When Neil asks about Tessa’s resignation, Mariah will simply suggest that she took a last-minute opportunity.

Sharon will catch up with Mariah later and demand answers about the Sante Fe train ticket. Mariah will confess that she changed her mind. She couldn’t abandon her loved ones, so Tessa took off alone. Sharon will beam with pride as Mariah prepares to kick off the show.

Once GC Buzz goes live, Mariah get emotional as she talks about the loss. After a sweet speech, Mariah will suggest that Hilary would want everyone to keep buzzing. Devon won’t be interested in watching, but he’ll finally relent during the last few minutes. He’ll see Mariah’s sendoff and break down in tears.

Back with Mariah, she’ll be shocked to see Tessa by The Dive Bar. It turns out Tessa changed her ticket from one-way to round-trip. She’ll insist that she realized something before she left. Tessa doesn’t have to choose between Crystal (Morgan Obenreder) and Mariah. She’ll note that she may be off the grid for a little while, but she’ll return as soon as she can.

Other Y&R spoilers say Phyllis (Gina Tognoni) will be devastated by Hilary’s death. Summer (Hunter King) will console her mom and afterward, Jack (Peter Bergman) will as well. Nick (Joshua Morrow) will also reach out to Phyllis in her time of need. Billy will soften briefly during a chat with Phyllis, but his mood will turn sour over Nick and Jack. This Abbott clearly isn’t in a good frame of mind right now.

Summer will try to take advantage of that a little later. She’ll flirt with Billy and push him to move on with someone new. Summer will lean in for a kiss, but Billy will reject her. He’ll maintain that he can’t get involved with Phyllis’ daughter, but Summer won’t think that should stop them.