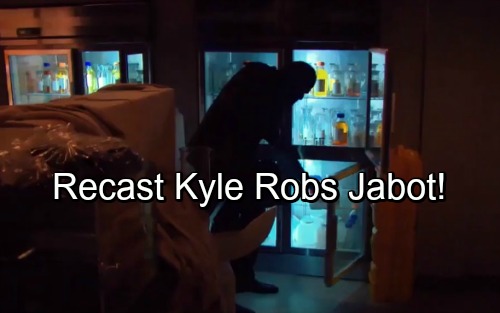 The Young and the Restless (Y&R) spoilers tease that Ashley (Eileen Davidson) will be appalled by some big news. She’ll discover that the newly remodeled Jabot lab was been broken into. A thief will snoop and try to walk away with something he can use to his or her advantage. This person will view Ashley as a target that must be taken down.

Who will be behind this shocking break-in? There’s no confirmation on the thief’s identity yet, so we’ve got a mystery on our hands. This gives us a chance to speculate on some fun storyline possibilities. One great option to consider is Kyle. The Young and the Restless spoilers say a Kyle recast is coming at some point, so this would be an exciting way to introduce him.

Back when the “no confidence” vote took place, Kyle’s decision arrived by courier. That was the first hint of Kyle’s impending arrival in Genoa City. Y&R always likes to set up recasts by throwing in a few mentions beforehand. It’s also nice when they can make a splash with a grand entrance. That could be what’s going on here.

Kyle stunned Jack by voting against him and refused to take his dad’s calls. It’s obvious that he’s mad about something. Perhaps Kyle believes he’s been treated like an inferior Abbott. He may think Jack (Peter Bergman) and the others haven’t given him solid opportunities at Jabot.

There might even be some off-screen incident that we’ll learn about later. Kyle may have an excellent reason for seeking revenge. As for his plan, maybe Kyle decided to fuel the conflict with his vote against Jack. He could’ve been trying to undermine Jack first before targeting Ashley. The lack of family unity would work in Kyle’s favor.

Now Jack will have to fight for the CEO spot. While he’s busy struggling, Ashley will have to deal with the lab break-in. Whatever the thief takes could leave Ashley in quite a bind. The mysterious culprit could score a formula that would really rake in the dough.

Once everything blows up, Kyle could reveal that he was the perpetrator. He might step forward and explain his vengeful strategies. This could be Kyle’s attempt to weaken his family members and take the Jabot throne for himself. Kyle may be out to prove that he’s a force to be reckoned with!