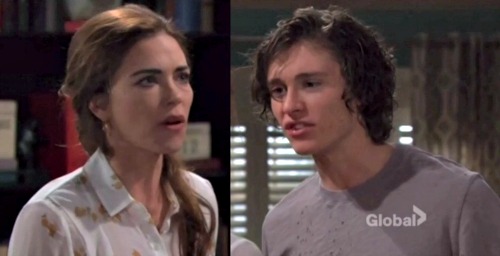 The Young and the Restless (Y&R) spoilers tease that Reed (Tristan Lake Leabu) will have a major outburst in the week ahead. He’s had a hard time dealing with all the drama surrounding J.T. (Thad Luckinbell). In fact, Reed’s issues have been building for a while now.

Y&R fans will recall that Reed ran away because he didn’t want to live in Warsaw. He left J.T., Mac (Kelly Kruger) and his siblings to stay with Victoria (Amelia Heinle). Reed has mentioned that he felt left out of the family when he was living with his dad. He’s been vague about the details, but he was certainly uncomfortable when J.T. first arrived.

It seemed like Reed was keeping quiet about J.T.’s abusive tendencies. That was undoubtedly part of the reason he wanted to get away from him and live in Genoa City. However, Reed and J.T. have grown closer lately. He thought his parents were going to marry and give him a solid family unit. Now that everything has fallen apart, Reed will put the blame on his mom.

The Young and the Restless spoilers say Victoria will be taken aback by Reed’s behavior this week. She’ll let him know his blatant disrespect is most definitely not OK. Victoria will imply that Reed’s father would be livid if he were there, but Reed will cut her off. He’ll insist that J.T. isn’t around and it’s all because of her.

This kid’s got some nerve considering J.T. tried to kill his grandpa not once, but twice. Victor (Eric Braeden) nearly died and J.T. comforted his son like the liar that he was. However, we’ll cut Reed some slack since he’s coping with a lot. Perhaps Reed will simply take his anger out on Victoria in the heat of the moment. He’s feeling hurt and confused now that J.T.’s “gone on the run.”

Of course, The Young and the Restless viewers know J.T.’s actually dead. Will Victoria ever admit that to Reed? Time will tell, but Reed’s going to want some answers. He’ll undoubtedly push Victoria to explain the reason for their split.

Victoria may break down and tell Reed that J.T. abused her. She might describe the physical confrontations and hope Reed understands why she had to call off the wedding. The Young and the Restless spoilers say Reed will bid his family and friends farewell on April 27. He’ll want to go find himself and process some of the horrifying revelations about J.T.

It sounds like Reed’s decision will bring more pain for Victoria. Between the cover-up and Reed’s departure, Victoria will be a real mess. We’ll give you updates as other Y&R news comes in. Stay tuned to the CBS soap and don’t forget to check CDL often for the latest Young and the Restless spoilers, updates, and news.