The Young and the Restless Spoilers: Reed Keeps Quiet About Hitting Nikki – Coverup Crew Panic, Fear For Their Lives 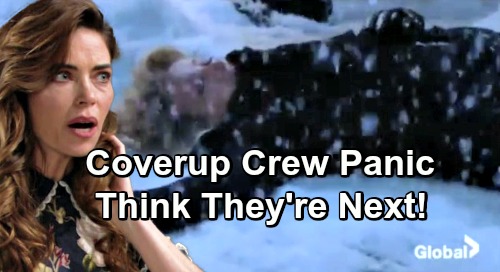 The Young and the Restless (Y&R) spoilers tease that Nikki’s (Melody Thomas Scott) accident will bring major concerns. Of course, there’ll be the obvious fears about her survival. Nick (Joshua Morrow) and Victoria (Amelia Heinle) will worry that the end is near for their mom.

Jack (Peter Bergman) will certainly fear for Nikki’s life as well. Nikki’s loved ones will rally around her as they watch and wait. Their hearts will sink when they learn alcohol was found in her system. That’ll be another reason to fret. They’ll know that Nikki has another battle ahead if she pulls through.

However, Y&R fans can also expect secret concerns from the cover-up crew. Victoria, Phyllis (Gina Tognoni) and Sharon (Sharon Case) will have a meeting about this dangerous situation. Reed (Tristan Lake Leabu) will be the real cause of this accident, but the remaining girls’ night gang members won’t know that. In fact, they’ll wonder if this was really an accident at all.

The women will toss around ideas about what led to this. They’ll wonder if this has something to do with the recent threat. The Young and the Restless viewers will recall that the stables were set on fire. Evidence was planted against Victor and J.T.’s (Thad Luckinbill) clothes were found in Nikki’s bed. Victoria and the others will have to ask themselves if this was another attack.

Phyllis will be particularly concerned about what the future holds for the rest of them. She’ll feel like they could all be taken out one by one. None of them will know when the threat could strike next, so they’ll all face total panic. As far as who’s doing all this, they’ll settle on J.T. himself as an option. They’ll wonder if J.T. wasn’t so dead after all and agonize over him possibly seeking revenge.

Will they consider confessing just to end this nightmare? Sharon might push for that as the pressure mounts. She’ll grow closer to Rey (Jordi Vilasuso) this week, so the risk is always there in those vulnerable moments.

The Young and the Restless spoilers say the truth about the hit-and-run will come out eventually. Victoria, Sharon and Phyllis will realize Nikki wasn’t actually targeted – at least not this time. Still, this whole ordeal will leave them on edge. Confession plans could still be mulled over in the aftermath.

It’s doubtful the deadly posse will go through with any admissions, but anxiety will definitely take a toll. We’ll give you updates as other Y&R news comes in. Stay tuned to the CBS soap and don’t forget to check CDL often for the latest Young and the Restless spoilers, updates, and news.