The Young and the Restless Spoilers: Rey Digs Into J.T.’s Disappearance, Is He Too Smart For The Newman Family?

BY Sean O'Brien on August 22, 2018 | Comments: one comment
Related : Soap Opera, Spoiler, Television, The Young and the Restless 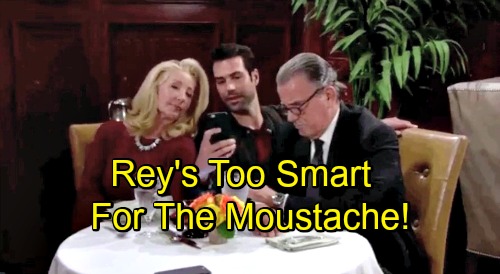 The Young and the Restless spoilers tease that the Newman family will be directly targeted for a legal take-down. Yes, J.T. (Thad Luckinbill), though dead for months and buried in Chancellor Park, is still tormenting Genoa City’s infamous clan.

Nikki (Melody Thomas Scott) knows that her life will be forever changed if she’s ever revealed as J.T.’s assailant. While the actions she took against Mr. Hellstrom were instinctively to protect Victoria (Amelia Heinle), what transpired after the head-conk could make Nikki’s actions appear to be premeditated. That would surely lead to an arrest, a trial, and potential time behind bars.

Of course, Vickie’s in danger of her illegal actions being exposed as well. She went along with the body dump and later lied to Paul (Doug Davidson), claiming to have helped J.T. escape town because she still loved him and felt pressured to aid the purported fugitive of justice.

Nick (Joshua Morrow) happened to meet Rey the other day at the GC Athletic Club’s rooftop bar. Rey was a digital screen watching soccer fan, while Nick is a longtime baseball devotee who enjoys time at the park.

There’s plenty of action in Rey’s game, but little scoring. Nick’s top sport pick involves considered movement and often many runs. While Nick didn’t know it, the second time he saw Rey, which was at Crimson Lights, he’d just again encountered the man who might strike at his family.

Morrow’s character broke various laws when he decided to literally become J.T. That kooky plan was thrust upon the audience as the start of Nick’s transformation into a different personality type. Thoughts about New Nick actually being another version of Adam (as most recently played by Justin Hartley)

Rey will hope to score through a concerted game plan. Sharon (Sharon Case) was and remains the only person who felt the coverup crew should come clean. The personal bond she’ll form with Vilasuso’s character will lead to a reveal. How long that information drop takes depends upon Y&R’s writers’ storyline stretch.

Oddly, in this instance, Victor (Eric Braeden) is the only main Newman family member who did nothing wrong. As fans recall, he was physically assaulted by J.T. and then almost killed in the hospital while recovering from those wounds and his backwards fall down the Ranch stairs.

Nevertheless, the Moustache is likely to help his family against Rey’s charges. Who knows, Victor might even assist Nick. CDL is a leading source for everything linked to The Young and the Restless. Check back regularly for Y&R spoilers and news!