The Young and the Restless Spoilers: Rey’s Lies Give Nick Another Chance – Sharon Reconsiders Shick Remarriage

BY Sean O'Brien on October 20, 2018 | Comments: one comment
Related : Soap Opera, Spoiler, Television, The Young and the Restless 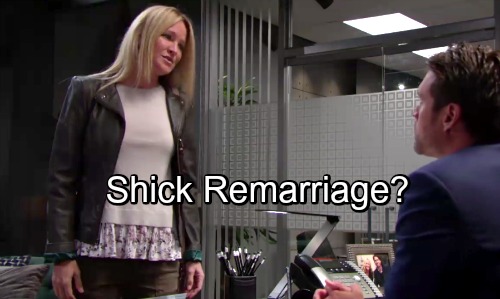 The Young and the Restless spoilers tease that Sharon’s (Sharon Case) increasingly close connection with Rey (Jordi Vilasuso) will serve as the catalyst that makes Nick (Joshua Morrow) a viable romantic option again. While Shick’s remarriage is far from certain, it will become a possibility this fall.

Rey will soon drop the dime on Sharon and her cohorts. Detective Rosales could easily be the person who has threatened the coverup crew with anonymously sent letters. Even if he’s not employing a tactic to push the four ladies out of the weeds, then his role as Paul’s (Doug Davidson) replacement will likely serve to create a confrontation that damages, or ends his connection with Sharon.

It’s natural that Sharon would be drawn to Rey. She’s appreciated his friendship and also wants to keep an eye on whatever he’s learning about J.T. (Thad Luckinbill). Rey is wise and understands what the score is without Sharon having openly stated it.

The proximity between Case and Vilasuso’s characters has significantly narrowed in recent weeks as Sharon accepted the victim’s advocate position at the Department and Rey moved into the invented Crimson Lights second floor apartment. As Y&R viewers know, both developments weren’t a stretch within this soapy world.

Nick has no way of knowing that Rey’s leading motivation isn’t to become Sharon’s next romantic partner, that would actually be the detective’s secondary motivation. Instead, Mr. Rosales believes that Sharon, Nikki (Melody Thomas Scott), Vickie (Amelia Heinle), and Phyllis (Gina Tognoni) are withholding some type of collective secret that involves J.T.’s disappearance.

Rey may suspect that J.T. was killed, but hasn’t pushed the idea public. His goal is to remain hidden in plain sight while he targets the crew’s weakest link, Sharon. It’s not that he believes this still-single lady is fragile. No, Rey thinks that she is the most likely person who will serve as an information source and help the open case to be solved.

When this portion of the climax within the storyline plays out, Sharon and Rey will be at loggerheads. Nick is positioned by Shick’s enduring history to help the one woman who he’s loved more than any other. So, it stands to reason that shoulder will be made available.

Despite what she feels now, Sharon will throw Rey off and see Nick in a renewed light. With that the door to potential reunion and maybe, Shick’s remarriage will then become legitimately plausible.