The Young and the Restless Spoilers: Sharon Makes Love With Nick – Distracts Him From J.T. Murder Cover-up Trail

BY Marcy Cohen on May 2, 2018 | Comments: 2 comments
Related : Soap Opera, Spoiler, Television, The Young and the Restless 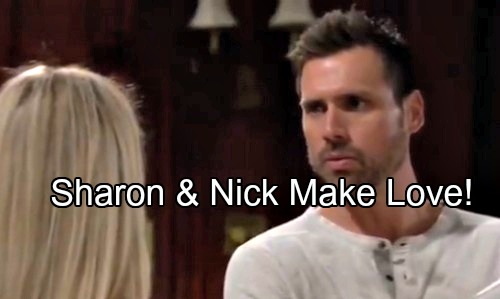 The Young and the Restless (Y&R) spoilers tease that Nick (Joshua Morrow) will refuse to let J.T. (Thad Luckinbell) get away with his crimes. The longer J.T.’s gone, the more determined Nick becomes. He just wants to find J.T. and get some justice for his family. Nick also fears J.T. could come back and hurt Victoria (Amelia Heinle), so he’d like to see him apprehended before he has the chance.

Of course, Nick’s fighting a pointless battle. J.T.’s dead and buried, so Sharon (Sharon Case) will naturally be uncomfortable with Nick’s endless search. The Young and the Restless spoilers say Sharon will struggle to hide her nervousness. She’ll worry that Nick’s digging could get the cover-up crew in major trouble.

Nick’s already noticed that something’s up, but Sharon hasn’t been willing to divulge her secret. However, Nick will hope to change that soon. Y&R fans can expect Nick to corner Sharon and push for answers. Since Sharon will be uneasy when J.T.’s name comes up, Nick may wonder if this has something to do with him. He might suggest that if Sharon knows J.T. details, she should spill them.

The Young and the Restless spoilers say Sharon will feel like she has nowhere left to turn. She’ll make a split-second decision and it’ll lead to a lie. Sharon will claim that her feelings for Nick have resurfaced and that’s why she’s been on edge. It’s true that Sharon’s in love with Nick, but that’s certainly not the reason she’s been so jumpy lately.

Nevertheless, Sharon will insist that’s all there is to it. She’ll manage to distract Nick with sex and a lovely reconnection. Sharon will undoubtedly enjoy it, but this is setting “Shick” up for serious problems. Nick’s going to feel used when he learns Sharon made her move as a distraction.

Sharon may have her work cut out for her as she tries to regain Nick’s trust. She’ll need to convince him that their love session was more than a convenient solution. Sharon motives won’t exactly be pure when they sleep together, but that doesn’t mean it won’t matter to her. These two are soul mates, so let’s hope they can weather the storm!