The Young and the Restless Spoilers: Sharon Suspicious of Nick and Phyllis Cheating Again – Shick In Danger 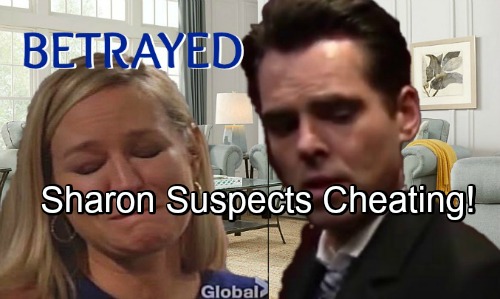 The Young and the Restless spoilers tease that Sharon (Sharon Case) will soon have her suspicions about Nick (Joshua Morrow) and Phyllis (Gina Tognoni) confirmed. When that happens the fate of Shick will surely be at least in doubt.

Nick acted on impulse after Sharon questioned his bizarre J.T. (Thad Luckinbill) ruse. Why he felt compelled to gaslight his supposed true love and his own mother didn’t need to be part of the plan to get Victor (Eric Braeden).

It would have been bad enough to carry out such a ruse without telling Sharon, if he hadn’t also included the cottage scare as part of the setup. That part of this plot line was a bit muddled, as Nick offered no clear explanation as to why he felt the need to include that kooky sidetrack.

Sharon was naturally thrown by what happened and simply needed time to digest all elements. Meanwhile, Nick bumped into Phyllis at the Genoa City Athletic Club bar. They rashly decide to head back to Summer’s (Hunter King) condo and replay the steamy elements of Phick, meaning the Michelle Stafford-era positions.

It just so happened that Phyllis learned about Billy’s (Jason Thompson) latest fall off the gambling wagon. That was such an egregious development that she needed to pull Nick back to the mid-2000’s? Apparently Y&R felt the need to write it exactly that way.

This scribe was not a Phick fan. And, he doesn’t want to see Phick Part II, even though Tognoni’s edition would provide alternative takes in modern times.

Shick fans have waited far too long for this revival just to see it be cut down by a seemingly confused longing for a Phick redux. How could that angle be better than Shick 2018?

Sharon’s honesty allowed Nick to finally learn the truth about Christian (Jude and Ozzy McGuigen). Mariah (Camryn Grimes) is also part of this revival, which offers the closest possible Sharon-Cassie-Nick redo. So why nix it?

Here’s hoping that Sharon is able to deal with what she’ll most certainly learn. Nick’s dalliance with Phyllis isn’t as bad as when he abandoned Sharon after Cassie died. But this does evoke the horrible decision that split Shick. So, is this re-pairing actually still on?