BY Kinsley Goldman on December 26, 2018 | Comments: one comment
Related : Soap Opera, Spoiler, Television, The Young and the Restless 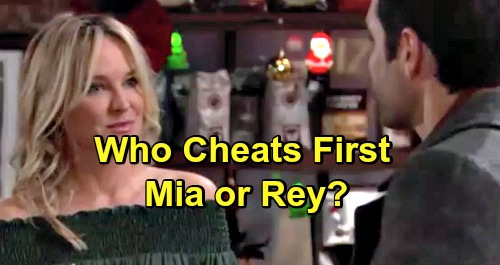 The Young and the Restless (Y&R) spoilers tease that serious betrayals could be looming in Genoa City. Sharon Newman (Sharon Case) and Rey Rosales’ (Jordi Vilasuso) bond remains strong, but they’re trying to shove it aside for the sake of his marriage. Meanwhile, Mia Rosales (Noemi Gonzalez) hangs like a dark cloud over Arturo Rosales (Jason Canela) and Abby Newman’s (Melissa Ordway) relationship.

It’s clear that trouble’s brewing on both sides of Mia and Rey’s marriage. They’re finally in a good place again – at least that’s what they’re telling themselves. Rey may have let go of his anger, but that doesn’t mean he’s let go of Sharon.

Of course, Sharon’s in denial about their lingering connection. Rey’s Christmas gift seemed more than friendly, but Sharon brushed it off as an appropriate coworker present.

Mia may be sabotaging herself by trying to keep Sharon close and even attempting to befriend her. There’s no way Mia really wants to be Sharon’s gal pal. She just wants to keep an eye on the competition.

The Young and the Restless spoilers say the battle for Rey’s heart could heat up in the coming weeks. There’ll definitely be some moments of temptation along the way. Rey may find it increasingly difficult to resist Sharon.

However, Mia just might face some temptation of her own. She cheated with Arturo once and she just might do it again. A Sharon and Rey hookup seems inevitable and so does Mia’s steamy reconnection with Arturo.

It’s just a matter of which half of this marriage will surrender first. Mia betrayed Rey in the past, but they’re working with a clean slate now. Will she blow everything by hopping in bed with his brother again? No one would be surprised!

However, Y&R might let Rey be the betrayer this time around. If his bond with Sharon becomes too intense to ignore, they may fall into bed together and kick off the show’s next big secret. Perhaps Rey would understand Mia’s perspective a bit better if he betrayed her, too.

One way or another, Rey and Mia’s repaired marriage will collapse all over again. Will Rey or Mia be to blame? Which one of these Young and the Restless characters will cheat first and make the first wrong move? We’ll give you updates as other Y&R news comes in. Stay tuned to the CBS soap and don’t forget to check CDL often for the latest Young and the Restless spoilers, updates and news.