The Young and the Restless Spoilers: Sharon Welcomes New House Guests – Forced To Defend Herself From Nick 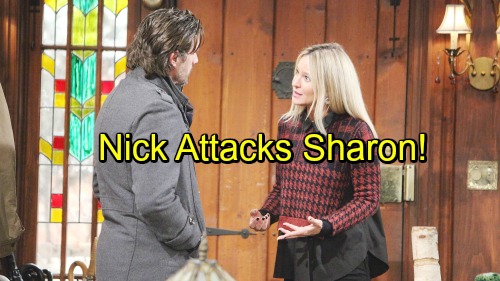 The Young and the Restless spoilers documented Sharon’s (Sharon Case) quick bounce-back from Shott. She actually is getting over Scott (Daniel Hall), which is encouraging to all longtime Sharon fans who were worried about this character’s regression. Actually, one of her longstanding positive personality traits has again been evidenced as a result of the recent reveal.

Nick (Joshua Morrow) nailed his ex-wife’s intent. He saw that she was taking an interest in a new character, Kathy, and her two children. As Nick told Sharon, her new project was filing a void. Sharon basically didn’t deny it.

Mariah (Camryn Grimes) was ready to enjoy a quiet night at the Cottage when four people walked in. Sharon, she recognized. The other three people, she didn’t.

Whether this new character is legitimate remains to be seen. She’s already blamed capitalism for her woes, which is reflective of a victim’s mindset. Isn’t she responsible for the choices that were made in life?

How easy it is to blame an economic system that has provably lifted more boats than any other on the earth. An example is Sharon’s success in taking over Crimson Lights resulted in Kathy getting a handout. Without other people buying her products that wouldn’t have been possible.

Sharon is a soft touch when vulnerable, like now, and can be taken advantage of at times. That’s why it’s good Mariah is there to protect her mom. Grimes’ character, like Cassie (also Grimes) before her, has a good heart. But she’s also street wise and has become, rightfully, fiercely protective of her mother.

This scribe thinks it’s great that Y&R opted to not write Sharon backwards. Seeing her fall apart because a six-month boyfriend canoodled with Abby (Melissa Ordway) wouldn’t have been believable.

The goodwill gesture Sharon is offering to this woman and her children is touching. Hopefully, Kathy turns out to be harmless and just needs a strong push in the right direction. Maybe Sharon can get her to stop feeling sorry for herself. She called Sharon a ‘glamor puss’, which reaffirmed Kathy’s downtrodden, life is unfair, outlook.

Hardcore viewers surely noted Sharon’s peck on Nick’s cheek during the aforementioned scene. She was thanking him for telling her the truth about Scott and momentarily seemed smitten with her original true love.

Nick’s currently with Chelsea (Melissa Claire Egan). Until the Adam (Justin Hartley) paternity reveal plays out (if it ever does), Chick should remain generally solid for awhile. But sentimental fans and old-school romantics can always hope that Shick eventually gets another chance. Who knows, maybe some day Nick will move back in?