BY Marcy Cohen on September 30, 2018 | Comments: one comment
Related : Soap Opera, Spoiler, Television, The Young and the Restless 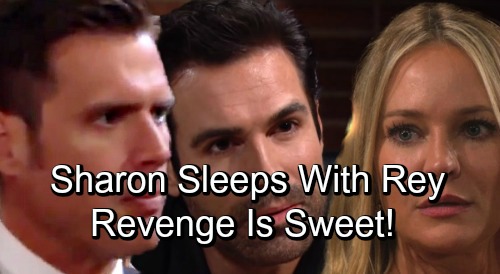 The Young and the Restless (Y&R) spoilers tease that Sharon (Sharon Case) has some heartache in her future. She’s currently in the dark on Nick’s (Joshua Morrow) one-night stand with Phyllis (Gina Tognoni), but that can’t stay hidden forever. This secret’s bound to blow soon enough.

Sharon’s also keeping her role in the J.T. (Thad Luckinbill) cover-up a secret, but there’s a chance that’ll remain under wraps for a while. Victoria (Amelia Heinle), Nikki (Melody Thomas Scott) and Phyllis will certainly hope so. Since Sharon should be hurt and furious over Nick’s betrayal, she may see no reason to divulge her own drama. Sharon won’t feel like she has to be loyal at that point.

That could keep the J.T. story going strong and set up some November sweeps shockers. Regardless, Sharon and Nick’s wedding may or may not happen. Even if they manage to tie the knot, an annulment seems likely.

Mariah (Camryn Grimes) knows the truth as of Thursday’s episode, so she could crack under the pressure. She might come clean or accidentally let Sharon overhear the bombshell. Eavesdropping is obviously a real problem in Genoa City!

Then again, guilt could hit for Nick once more. He could decide to come clean right before or even right after the nuptials. If the confession comes afterward, that might make the betrayal even worse. One way or another, Sharon has to find out that Nick cheated. He can use the excuse of finding her engagement ring, but that just won’t fly.

Nick should’ve talked to Sharon and got all the facts. This wasn’t a true break like Nick will want Sharon to believe. Y&R fans can expect some explosive scenes between these two. During the devastating aftermath, what will Sharon do next? We’d say she’ll probably do Rey (Jordi Vilasuso)!

Rey will soon move his stuff into the apartment above Crimson Lights. Where was this apartment when Mariah was begging for a place to set up homeless Tessa (Cait Fairbanks)? Not in The Young and the Restless writers’ minds yet, we suppose.

Since this apartment has magically appeared, Rey will be closer to Sharon than ever. Perhaps Sharon will enjoy a hookup of her own before long. That could definitely complicate Rey’s investigation, but he may not be able to resist. They have a spark that could grow into a sexy flame.

As for Nick, he may hit the roof and make Rey his rival. Nick may struggle to win Sharon back as she keeps bonding with her new man. The Young and the Restless spoilers say some hot drama’s brewing, so stay tuned. We’ll give you updates as other Y&R news comes in. Stick with the CBS soap and don’t forget to check CDL often for the latest Young and the Restless spoilers, updates and news.