BY Kinsley Goldman on June 18, 2018 | Comments: one comment
Related : Soap Opera, Spoiler, Television, The Young and the Restless 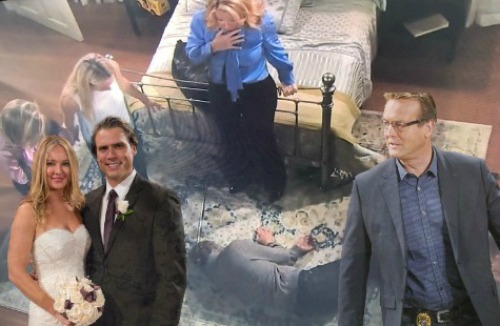 The Young and the Restless (Y&R) spoilers tease that Nick (Joshua Morrow) will pop the question. Sharon (Sharon Case) will certainly be taken aback by this sudden proposal. Since their reunion is still fresh, Sharon may wonder why Nick wants to rush into an engagement. She won’t want him to feel pressured to put a ring on it.

However, all the Christian (Jude and Ozzy McGuigen) drama is making Nick see what’s important in his life. He knows what he wants to hold on to. Nick will push Sharon to accept his offer of marriage and tie the knot again. He’ll be convinced it’ll stick this time.

Sharon may cave in eventually, so this could build some interesting possibilities. Let’s consider all the facts. For starters, Sharon’s (Sharon Case) keeping some shocking secrets. She helped Nikki (Melody Thomas Scott), Victoria (Amelia Heinle) and Phyllis (Gina Tognoni) get rid of J.T.’s (Thad Luckinbill) dead body. Sharon has lied to Nick’s face repeatedly about that fateful night.

There’s a good chance those secrets will blow up before Nick and Sharon wed. We should also consider the fact that this proposal is indeed rushed. It seems likely that there’ll be a rushed wedding, too. What’s the hurry? The Young and the Restless undoubtedly has a plan in mind for the big reveal, so it could easily coincide with Nick and Sharon’s nuptials.

After all, few weddings have gone off without a hitch in Genoa City. If Sharon and Nick are going to remarry, there are bound to be some snags. It’s doubtful they’ll get to say “I do” anytime soon. Will some J.T. bombs drop just in time to derail the ceremony? It’s easy to imagine Paul (Doug Davidson) rounding up the Y&R cover-up crew during the celebration.

Nikki and Victoria would surely be there to support Nick. Since Nick thinks Phyllis and Sharon are fairly chummy these days, he’d probably invite her, too. The whole gang could be placed under arrest! It sounds like the other guests could be in for quite a show.

Will Paul score enough evidence to take the ladies into custody? Will he arrest them all at the “Shick” nuptials? The Young and the Restless spoilers say some chaos is about to hit, so stay tuned. We’ll give you updates as other Y&R news comes in. Stick with the CBS soap and don’t forget to check CDL often for the latest Young and the Restless spoilers, updates, and news.