The Young and the Restless Spoilers: Shick’s Tragic End – Is Sharon a Justified Bride or Heartless Hypocrite? 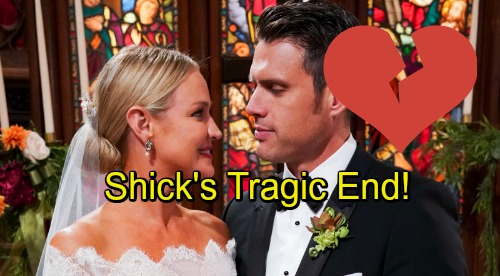 The Young and the Restless (Y&R) spoilers tease that the drama’s far from over for Nick (Joshua Morrow) and Sharon (Sharon Case). They’ll have major issues to deal with thanks to the fallout of their wedding fiasco. Nick set the disaster in motion by sleeping with Phyllis (Gina Tognoni) and refusing to be honest about it. Sharon seals their love story’s tragic end with Thursday’s rejection at the altar.

Nick and Sharon are a classic Y&R supercouple, but they just might be over for good this time. Of course, we should never say never. Victor (Eric Braeden) and Nikki (Melody Thomas Scott) have come back from far worse problems.

However, it’s easy to see that “Shick” won’t be reuniting anytime soon. Word has it Joshua Morrow wasn’t too keen on rebooting this relationship anyway, so that may be why it all blew up so fast. Fortunately, The Young and the Restless still gave us this wedding pandemonium. If Sharon and Nick’s relationship had to implode, it’s good that Y&R made it a can’t-miss event.

Of course, the situation has ignited a fierce debate on social media. Sharon’s actions are the ones sparking a disagreement. Was this reaction justified or is she taking things too far? No one can deny that Nick’s behavior was sleazy and irresponsible. He should’ve been mature enough to wait for an explanation from Sharon. A removed engagement ring isn’t a free pass for hot sex.

Furthermore, did Nick really have to sleep with Phyllis that very night? It seems like he could’ve kept it in his pants for five minutes. Even if Nick had to betray Sharon, literally anyone else would’ve been a better sex partner. There are just too many old wounds with his ex, so it’s no wonder Sharon hit the roof.

All of this dropped on Sharon at the worst possible time. She was already stressed about the wedding and keeping the J.T. (Thad Luckinbill) secret under wraps. You could argue that Sharon simply snapped. Was it the best idea to humiliate Nick in front of everyone, including tearful Faith (Alyvia Alyn Lind? No, but we have to chalk part of that up to typical soapiness.

On the other hand, Sharon’s doing some serious damage here. Is revenge worth emotionally scarring her child? Some Young and the Restless fans are praising Sharon for having the guts to put Nick in his place. Others think Sharon’s being cruel, especially since she’s hiding something huge, too.

The J.T. cover-up didn’t involve cheating, but it is what led to “Shick’s” latest revival. We can’t forget that Sharon fibbed and said her feelings were causing her nervousness. Sharon certainly felt something for Nick, but that wasn’t what truly had her on edge. Since then, Sharon’s blasted Nick for his deception when she was also lying to his face.

Bottom line, Nick deserves to suffer for what he did. It’s just that Sharon should’ve been honest and could’ve gone about dumping him in better way. Naturally, we’re grateful she didn’t! There’d be no soapy fun if Sharon calmly called off the wedding in private. The Young and the Restless spoilers say the aftermath will be just as exciting, so stay tuned.

Which camp do you fall in? Do you think Sharon’s a queen for ripping into Nick and exposing Phyllis to Billy (Jason Thompson)? Is she a heartless hypocrite instead? We’ll give you updates as other Y&R news comes in. Stick with the CBS soap and don’t forget to check CDL often for the latest Young and the Restless spoilers, updates, and news.