BY Sean O'Brien on December 9, 2018 | Comments: one comment
Related : Soap Opera, Spoiler, Television, The Young and the Restless 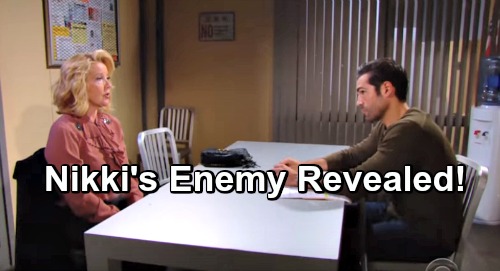 The Young and the Restless (Y&R) spoilers claim someone is clearly targeting Nikki (Melody Thomas Scott). But only a handful of characters would have the motive, means, and opportunity to be able to do what’s been done so far in Genoa City. So, who could this mystery persona be among all realistic possibilities?

Is it truly reasonable to believe that J.T. (Thad Luckinbill) dug himself out from under approximately six rectangular feet of dirt? In order to do so he would have had to recover from what Nikki accidentally did to him, miraculously survived, and somehow be pulling off what’s been done while remaining hidden from society.

However, all is possible in the soapy world. Among all potential candidates, he would have the easiest access to his own blood, which would make the stain on his off the rack shirt a simple get. J.T.’s experience as a private detective also can’t be discounted, nor can his motivation to get his presumed killer. Therefore until his body is found, Mr. Hellstrom can top this short list.

Tessa (Cait Fairbanks) has already admitted to being a blackmailer and a liar. Therefore, no matter what Mariah (Camryn Grimes) comes to believe on this week’s new Y&R episodes, December 10-14, Miss Porter remains under suspicion.

It would make sense for Tessa to default into denying her actions while being questioned in the woods by Nikki, Vickie (Amelia Heinle), and Sharon (Sharon Case). The entire Canada coyote scenario still seems far-fetched as well, making Tessa’s eventual, full reveal possible.

The Young and the Restless spoilers say Reed (Tristan Lake Leabu) is about to return to GC. He’ll soon learn the sordid details about his dad’s death and blame Victor (Eric Braden) for it. Reed’s reaction could also mean that he’s currently targeting Nikki, but probably not. However, his stepmom, Mackenzie (Kelly Kruger), is intriguing.

She’s been off-screen for months. ‘Mack’ could be reacting to having learned that Nikki removed her children’s father from the earth and hasn’t faced justice for reasons Kruger’s character wouldn’t have learned. So all that’s happening could be a form of vigilante justice.

Beyond the above, Ian Ward (Ray Wise) is the leading side character who must be mentioned. Yes, there are other bizarre personalities from Nikki’s past, or the background’s of other Newman’s. But none were, or are as obsessed with Scott’s character as Ian has long been.

Having been written into The Young and the Restless numerous times in the past, it would be great to see this outstanding actor reprise a particularly unique role. Ian has committed so many crimes and could easily be imprisoned, or escape (again). This possible plot path would allow Y&R to quickly tie up its storyline as well.

Daytime viewers are loyal and savvy. They will digest the above, while also considering unnamed possibilities.