The Young and the Restless Spoilers: Should Y&R Recast Ashley – Does Eileen Davidson’s Departure Mean the End?

BY Sean O'Brien on October 1, 2018 | Comments: one comment
Related : Soap Opera, Spoiler, Television, The Young and the Restless 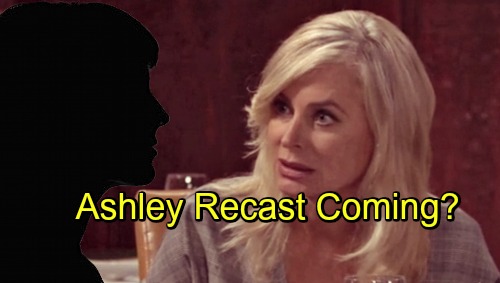 The Young and the Restless spoilers tease that Eileen Davidson’s (Ashley) ‘voluntary’ departure (Davidson and Mal Young seem to have different opinions on what this departure means) from the cast doesn’t have to mean the end. Yes, one of Y&R’s legacy characters could be recast again.

Ashley is currently embroiled in major family drama, while also having just started a romantic relationship with Neil (Kristoff St. John). It would be unproductive to simply write Ashley away. Why not just replace the actor as has been done twice before?

Davidson has had numerous stints on Y&R. Her character even crossed over to its spinoff show, The Bold and the Beautiful, during the last decade. However, hardcore fans know that other actors have filled this role as it existed in Genoa City through the years.

Ashley came into existence in 1984, with Davidson first filling the role. She remained on contract through 1988, when Brenda Epperson took over. She played Ashley through 1995. Shari Shattuck then played Ashley from 1996-1999. Davidson has inhabited that alter ego since then.

Soap fans surely become attached to certain actors playing a role, especially when that actor’s run stretches for decades. However, daytime supporters also accept switch-outs if the actor who comes next, or who who has been seen before, is good.

Michael Muhney was and remains beloved by many fans for his portrayal of Adam Newman from 2009-2014. However, Justin Hartley became the recast in 2014 and had a widely praised run through 2016.

Many other recast comparisons could be made, including Stacy Haiduk’s recent take-over of Davidson’s other well-known soap role. Haiduk has become Kristen on Days of our Lives this year. Davidson initiated that role in 1985.

Currently, Ashley believes that Billy’s (Jason Thompson) gambling problems and subsequent ouster as Jabot’s Chief Executive Officer will allow her to gain control. But a removal of the blood-Abbott clause, as has been called for by many, would then allow anyone, including Kyle (Michael Mealor), or Jack (Peter Bergman) to become head honcho.

Surely, removing the Ashley character from this developing drama in coming weeks wouldn’t serve the long arc that’s playing out. So, why not have Epperson, Shattuck, or a new actor keep Ashley going?

Separately, Nashley is a nice story that was briefly written in years past and has been revisited in recent months. Neil and Ashley make sense at this personal point in both character’s lives, as each person is single. They’ve maintained a long friendship, which naturally can lead to a serious relationship and eventual marriage.

Davidson’s place in Y&R’s history is fully secured, whether she returns someday, or not. But the character she plays can be sustained for years to come with a recast. CDL is a leading source for everything linked to The Young and the Restless. Check back regularly for Y&R spoilers and news!