The Young and the Restless Spoilers: Sparks Fly for Billy and Victoria, Phyllis and Jack Reignite – Philly Split Revives Villy and Phack 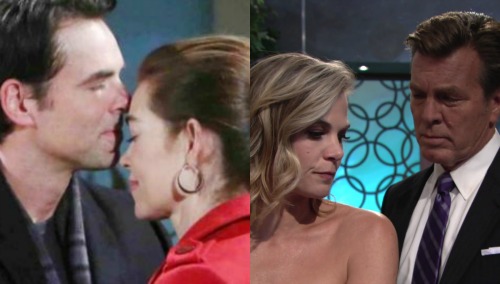 The Young and the Restless (Y&R) spoilers tease that Phyllis (Gina Tognoni) and Billy (Jason Thompson) will stay on separate paths for now. Their split was brutal, so there’s no hope for reconciliation anytime soon. Billy wanted to hurt Phyllis in the worst way possible and he certainly achieved that. She’s struggling, but she’s also got a new point of view.

Phyllis recently decided to make the most of this fresh start. She shared a sweet moment with Jack (Peter Bergman) and there’ll undoubtedly be more of those soon. Jack has made it clear that he still has feelings for Phyllis. Despite her many screwups, he just can’t help loving her. Now that Phyllis is a free woman, Jack may be hoping they can reconnect. It’s surely a possibility in the back of his mind.

Phyllis will need Jack’s support in the coming weeks. He’ll happily give it to her and she may offer some in return. Ashley’s (Eileen Davidson) exit will bring even more changes for the Abbott family. Jack’s bound to battle some regrets as he reflects on all the chaos. He may open up to Phyllis and start warming her heart again.

Phyllis views Jack as the complete opposite of Billy right now, which is exactly what she’s looking for. Likewise, Billy will be looking for someone who’s very different from Phyllis. He’ll end up leaning on an ex as well soon enough.

Later this week, The Young and the Restless spoilers say Billy and Victoria (Amelia Heinle) will feel a familiar spark. Since Billy’s still so vulnerable, Victoria may shut things down immediately. She’s dealing with J.T. (Thad Luckinbill) cover-up drama anyway, so she doesn’t need to complicate her life.

However, Victoria will need somebody she can rely on eventually. Once the truth about J.T. explodes, maybe Billy will step up for her. Y&R fans know Jack would do the same for Phyllis. Are these former flames about to pair up again? Will we see a “Phack” reboot and a new beginning for “Villy” in the weeks ahead?