The Young and the Restless Spoilers: Summer Pursues a Dangerous Secret – Pushes Kyle to Divulge Dirt on Phyllis 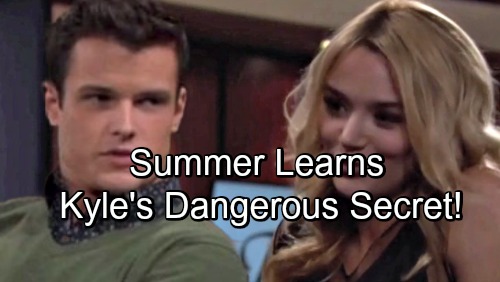 The Young and the Restless (Y&R) spoilers tease that Kyle (Michael Mealor) will make the most of his current advantage. He knows Phyllis (Gina Tognoni) hooked up with someone behind Billy’s (Jason Thompson) back, so that’s obviously some useful info. Kyle will thoroughly enjoy taunting Phyllis with this tidbit next week.

Phyllis and Billy will remain in a rocky place. The Young and the Restless spoilers say Kyle will happily exploit that. Whenever Phyllis criticizes Billy’s behavior, Kyle will chime in with snide remarks. His comments should leave Phyllis concerned about what he might expose.

Phyllis realizes how much chaos it’ll cause if Kyle spills the beans. She’ll do her best to keep his mouth shut, but it won’t be easy. There’ll be loads of tension between these two at the office. Now that Summer’s (Hunter King) on site, that’ll lead to even more trouble. She’ll be around to witness Phyllis and Kyle’s weird vibe.

Y&R spoilers say Summer will seek the real scoop. She’ll push her mom to tell her what’s going on, but she won’t get a straight answer. Phyllis will simply argue that it’s a work issue. She’ll suggest that Summer should let it go, but that’s not her manipulative daughter’s style! Once Summer knows there’s a secret to uncover, she’ll do everything in her power to find out what it is.

Naturally, that’ll bring serious pressure for Kyle. Tormenting Phyllis will be fun for him, but that doesn’t mean he’ll want to blab. Kyle won’t like the idea of hurting Billy or blowing his upper hand. He’ll do whatever he can to distract Summer from her latest goal. For Kyle, that often means stripping down in some capacity. That usually gets the job done!

Even if Kyle finds some other type of distraction, it won’t hold Summer off for long. In fact, Summer just might turn the tables and seduce her way to some dirt. She’s not above using her body to get what she wants. Regardless, it’s clear that Summer’s on the verge of the truth.

Summer has formed a strange bond with Billy, so she could easily blow “Philly” up down the road. If Summer learns about her mom’s betrayal, she’ll probably squeal on her in a heartbeat. Will it drive Billy to betray Phyllis as well? Summer would probably be on board with that!