The Young and the Restless Spoilers: Summer Takes Things To Another Level – Billy Fails, But Who’s To Blame? 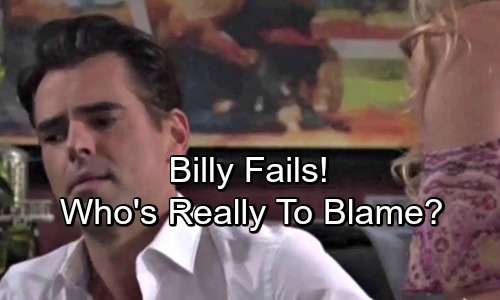 The Young and the Restless spoilers tease that Summer (Hunter King) will not stop. She recently told Kyle (Michael Mealor) that her priorities have changed. One of her new goals is getting Billy (Jason Thompson), thus the reason she grabbed him and planted a kiss on his lips at Jabot.

It’s very nice that Phyllis went to Billy and told him that she was wrong. In reality, she wasn’t wrong because his dive back to gambling is the reason why she’s understandably questioning his choices. Underneath current issues these two actually love each other.

Upon storming back to Genoa City earlier this, uh, summer, Summer decided that she was going to do something about the mistake her mom made in divorcing Jack. King’s character believes there was no good reason that Bergman’s character was discarded.

Summer’s feeling about Phack initially led to flirting with Billy. Then it grew into more.

Billy was lured back to gambling when Summer purposefully arranged a game to be played at her condo while Phyllis was away. She later needed Billy’s help to escape a money jam at a high stakes contest set in a suite at the Genoa City Athletic Club.

Sauntering around in her nighties was one thing. Implying illicit activities and then outright suggesting that they sleep together went too far, verbally. But then Summer added physical action to her game plan.

Taking Billy’s head and pulling her mouth to his so they could kiss in Jabot’s Chief Executive Officer’s office was reckless. Summer wants to get caught. That’s why she keeps pushing it. She also believes that Billy won’t be able to resist the offer of herself.

Phyllis will surely learn about Billy and her daughter, or walk in on Silly at some point. When she does, Philly is probably over. That will leave Billy alone. He’ll be angry, but Summer will be there to console him.

But Phyllis’ brat, uh, daughter, has a problem. Billy will be angry because Summer will be in the middle of Philly’s rift. This is a soap, so Thompson’s character might not think that through, or will couple with her at some point anyhow.

Y&R spoilers tell us that Billy will fail, as usual – but who’s really to blame? CDL is a leading source for everything linked to The Young and the Restless. Check back regularly for Y&R spoilers and news!