The Young and the Restless Spoilers: Summer’s $10,000 Bet Pulls Billy Back to the Dark Side – Gambling Abbott Risks All to Save Her

BY Heather Hughes on June 23, 2018 | Comments: one comment
Related : Soap Opera, Spoiler, Television, The Young and the Restless 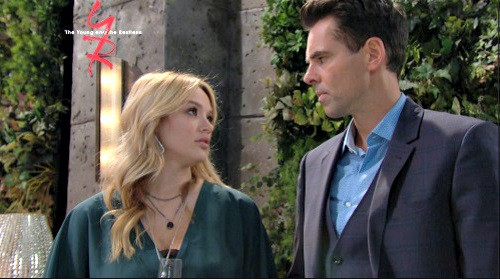 The Young and the Restless (Y&R) spoilers tease that Summer (Hunter King) will once again put Billy (Jason Thompson) in a tight spot. She seems determined to cause problems in Phyllis (Gina Tognoni) and Billy’s relationship. That’s pretty much Summer’s main goal at the moment. She’s been enjoying all her pot-stirring, but it’s about to turn into a very dangerous game!

Y&R fans know that Summer recently roped Billy into a poker game. Unfortunately, it won’t be his last. The Young and the Restless spoilers say Summer will find herself in a dire situation. When she gets in over her head in another poker game, Summer will turn to Billy for help.

Part of her should realize this could make waves and feed right into her goal. However, it also looks like Summer will genuinely need assistance. She’ll definitely be sweating it out during some high-stakes hands.

Summer won’t have enough money to cover her wager, so she’ll ask Billy to fork some over. He’ll reluctantly ask how much she needs. Billy will pull out a few hundred-dollar bills and expect that to take care of it. Sadly, Summer will be far deeper in the hole. She’ll insist that she needs $10,000 to dig herself out of trouble.

Billy won’t want to leave Summer hanging, but there’s no way he can trust her with 10 grand. If she’s gotten herself in such a jam, she obviously doesn’t know what she’s doing. Instead of writing Summer a check, Billy will take her spot at the poker table. He’ll feel quite a rush as he gambles the night away.

Billy will throw back plenty of drinks as well, so that can’t be good news. As he gets drunk, he may struggle to think clearly. Billy could end up in over his head just like Summer! The Young and the Restless spoilers say Billy will soon be at risk of losing everything. That could include the CEO position at Jabot. Billy is heading down a familiar dark road, so his career could be derailed.

At the very least, Billy’s love life and family relationships will be affected. Now that Billy’s had a taste of gambling again, will he be able to stop? Will Summer force Billy to grapple with his old addiction? We’ll give you updates as other Y&R details emerge. Stay tuned to the CBS soap and don’t forget to check CDL often for the latest Young and the Restless spoilers, updates, and news.