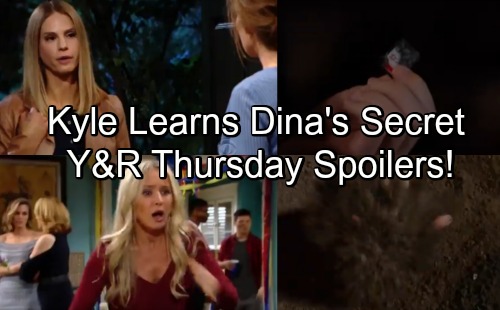 The Young and the Restless (Y&R) spoilers for Thursday, April 26, tease that Victoria (Amelia Heinle) is in for a shock. Her life’s been full of surprises lately and none of them have been good! That trend will continue when an angry and inquisitive Mac (Kelly Kruger) shows up. She’ll appear on Victoria’s doorstep and point out that her kids are missing a father.

Y&R fans will recall that Mac pushed for limited contact between J.T. (Thad Luckinbell) and their children. She made a big deal about seeking custody, so it’s somewhat puzzling that she’s causing a fuss over all this. However, Mac’s kids may be asking about their dad. Maybe she just can’t bring herself to believe that J.T. would abandon them. That could be the reason for this nosy mission in Genoa City. 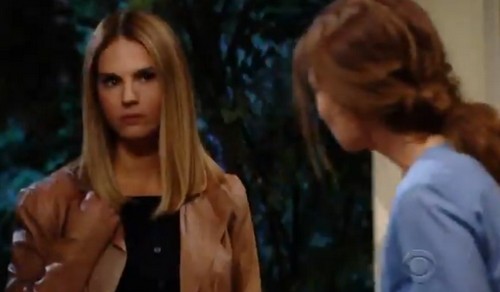 Victoria will grow anxious when Mac barges in and starts asking questions. She’ll do her best to dial down Mac’s suspicions, but that plan may not pan out. Mac knows how J.T. can be, so she may fear that something happened. She could easily pressure Victoria to divulge the real story.

Victoria may not be willing to take that step yet, but perhaps she can get Mac to cool off a bit. Covering up J.T.’s demise was pretty easy, but keeping it a secret will be tough. Speaking of secrets, Kyle (Michael Mealor) will learn a huge one in Thursday’s episode. The Young and the Restless spoilers say Ravi (Abhi Sinha) will repair the memory card and give it back to a curious Kyle. 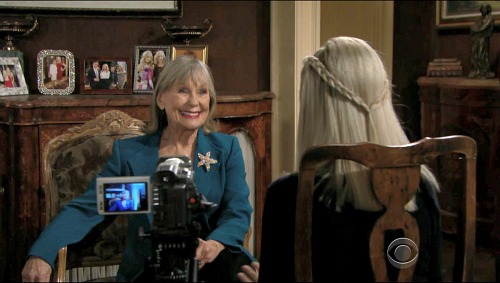 The rest of the footage will reveal Dina’s (Marla Adams) stunning secret. Kyle will discover that Jack (Peter Bergman) isn’t a blood Abbott, so that’s sure to throw him for a loop. Of course, Kyle will also realize he’s not a true member of the Abbott clan. He’ll have a lot to process after he watches Dina spill her juicy news.

Other Young and the Restless spoilers state that Sharon’s (Sharon Case) guilt will take a toll. She’ll imagine watching J.T. rise from the dead in the garden, so she won’t be in a great frame of mind! We’ll give you updates as other Y&R details emerge. Stay tuned to the CBS soap and don’t forget to check CDL often for the latest Young and the Restless spoilers, updates, and news.