The Young and the Restless Spoilers: Thursday, April 26 Update – Victoria Confesses to Mac – Kyle Learns He’s Not an Abbott

BY Heather Hughes on April 25, 2018 | Comments: one comment
Related : Soap Opera, Spoiler, Television, The Young and the Restless 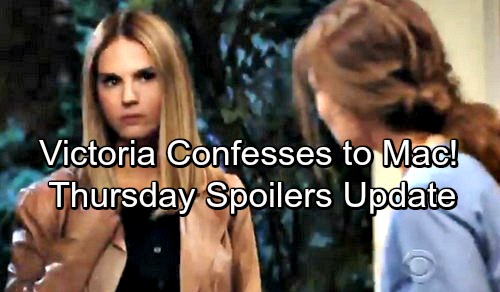 When Dina appears, she’ll ramble about her swimming lesson and urge Jack to meet her new pal. Dina will introduce Kyle and whisper to him about leaving “John” out of the loop. Kyle will think Dina may be mistaking him for Brent Davis. He’ll bring up the possibility to Jack, who’ll admit that Dina was certainly a cheater. Jack will think it’s good that John never learned the truth before his death.

Meanwhile, Ravi (Abhi Sinha) will restore the video on the memory card and give it back to Kyle. Y&R spoilers say Kyle’s in for a shock when he watches the footage. He’ll discover that Jack isn’t John’s (Jerry Douglas) son, so this storyline’s heating up!

At Victoria’s (Amelia Heinle) place, Mac (Kelly Kruger) will show up demanding answers about J.T. (Thad Luckinbell). She’ll mention the attacks on Victor (Eric Braeden) and gripe about J.T. deserting his kids. Victoria won’t offer any death details, but she’ll open up about the abuse she endured. She’ll wish she’d listened when Mac tried to warn her.

Mac will suggest that her own situation never turned physical, but she’ll still think she should’ve done more to help. She’ll hate that things got so dark for Victoria. Afterward, Mac will spot Sharon (Sharon Case), Phyllis (Gina Tognoni) and Nick (Joshua Morrow) at the coffeehouse. She’ll mention her visit to Victoria’s and fill them in on the abuse confession.

Nick will feel like he needs to be there for his sister, so he’ll head over. Phyllis will quickly follow to make sure Victoria doesn’t spill anything. Sharon will also drop by Victoria’s house soon enough. She’ll suggest that coming clean to the cops would be better than all this guilt.

Back at home, Sharon will have a nightmare about J.T. coming back from the dead. When Nick sees that she’s spooked, he’ll push her to open up. The Young and the Restless spoilers say Hilary (Mishael Morgan) will also have a lot on her mind. She’ll chat with Phyllis about her pregnancy and Devon’s (Bryton James) unpleasant reaction.

Hilary will rant about Simone (Shanica Knowles), but she’ll know she brings drama on herself sometimes. At Hamilton-Winters, Hilary will get into a fierce argument with Lily (Christel Khalil). She’ll threaten to keep her son or daughter away from Lily if this keeps up. Naturally, Lily won’t be afraid of Hilary’s threats. She’ll snarl that Devon will let her see the kid so she can be a female role model.