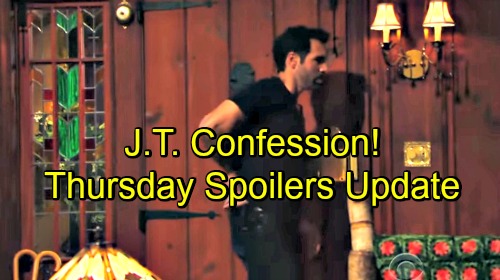 The Young and the Restless (Y&R) spoilers update for Thursday, August 30, tease that Kyle (Michael Mealor) and Ashley (Eileen Davidson) will clash over Billy (Jason Thompson). Ash will insist that they shouldn’t exploit Billy’s (Jason Thompson) gambling addiction, but Kyle will think it’d be worth it. After some bickering, Kyle will agree to back down. He’ll just have to move forward with his plan secretly!

Once Billy appears, he’ll argue with Kyle before turning his attention to Ashley. She’ll still think the new boutiques are a bad idea, but Billy will fiercely defend them. The Young and the Restless spoilers say Billy will warn Ashley to nix any sabotage plans. He’ll assure her that he’s got everything under control, but Ash will try to poke holes in his strategy.

At the coffeehouse, Sharon (Sharon Case) will push Mariah (Camryn Grimes) to enjoy a night out. She’ll think it’ll keep Mariah’s mind off her Tessa (Cait Fairbanks) fears. Mariah will decide to take the advice, so she’ll dash off. Next, Rey (Jordi Vilasuso) will waltz over to Sharon and face some questions. She’ll suspect that he’s in Genoa City with a specific mission in mind.

Rey will confess that J.T. (Thad Luckinbill) is the reason for his appearance. He’ll suggest that he’s a debt collector, so he’s hoping to find J.T. and secure payment. Sharon will be miffed over Rey’s previous lies. She’ll add that J.T. owes a lot of money he won’t be able to pay back.

Once Rey’s gone, Sharon will text the cover-up crew some updates. It won’t be long until a panicked Victoria (Amelia Heinle) arrives. She’ll worry that J.T. will find out about Nick’s (Joshua Morrow) impersonation scheme – or worse. Since Sharon’s the closest to Rey so far, she’ll be tasked with fishing for more info.

At The Dive Bar, Mariah will bump into Kyle and suggest doing shots. Kyle will be pretty pushy about getting rid of Mariah, so she’ll realize he’s meeting someone else. After some teasing, Mariah will take off and leave Kyle to see Sinead (Lira Kellerman). Y&R fans will recall that she’s Billy’s poker rival. Kyle will offer to pay off a massive debt for Sinead, but she’ll be uneasy about what he’ll want in return.

Billy and Victoria will show up together, so Kyle will have to think fast. He’ll move the meeting to the dining room downstairs. Once they’re settled, Kyle will explain his terms to Sinead. All she has to do is play against Billy and pull off a serious win. Kyle will want Sinead to really drain Billy, so she’ll quickly get on board.

Soon after, Sinead will approach Billy and encourage him to join a tournament. He’ll decline, but she’ll try to butter him up. Billy will look tempted by the time the conversation’s over.

Meanwhile, Sharon will invite Rey to dinner at her place. She’ll offer an apology for lashing out earlier, so he’ll give her one as well. Rey will be sorry that he wasn’t honest about his reason for coming to town.

When Mariah walks in, she’ll get an introduction and start grilling Rey about his job. Suddenly, a call will come in about an intruder. Mariah will spot someone near the window and freak out. She’ll join Sharon across the room as an armed Rey heads out the door. The Young and the Restless spoilers say the suspense will really build!

Fortunately, Rey’s gun won’t be necessary. Once he returns, Tessa (Cait Fairbanks) will emerge and catch Mariah off guard. It sounds like Tessa will have quite a story to tell. We’ll keep you posted as other Y&R news comes in. Stick with the CBS soap and don’t forget to check CDL often for the latest Young and the Restless spoilers, updates and news.