The Young and the Restless Spoilers: Thursday, December 13 – Furious Mariah Picks a Side – Nikki Loses a Battle

BY Heather Hughes on December 11, 2018 | Comments: one comment
Related : Soap Opera, Spoiler, Television, The Young and the Restless 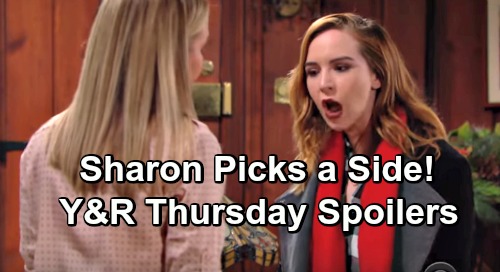 The Young and the Restless (Y&R) spoilers for Thursday, December 13, tease that Mariah (Camryn Grimes) will have to pick a team. Of course, she already made her choice clear in the car with Tessa (Cait Fairbanks). Mariah was obviously moved by Tessa’s remorse and now has no intention of leaving her. She’s also furious with the cover-up crew for going too far, so she’ll be firmly on Tessa’s side.

That means Sharon (Sharon Case) will get an earful soon enough. Mariah will rant about Victoria (Amelia Heinle) and Nikki’s (Melody Thomas Scott) actions, but she’ll ultimately learn Sharon was involved as well. Although Sharon took a softer approach than her partners in crime, nobody held a gun to her head and forced her to participate. Sharon will have to pay the price for being a pushover!

Y&R spoilers say Mariah will feel like her mom crossed line. Tessa may have demanded money for protection, but she never would’ve thrown a bag over Sharon’s head, interrogated her to tears and ditched her in the freezing woods. Mariah will rage about how traumatized Tessa was and wonder why Tessa was accused of things she never could’ve done.

How would Tessa have gotten her hands on Victor’s (Eric Braeden) gun or J.T.’s (Thad Luckinbill) bloody shirt? Why would Tessa have set the fire and risked exposure when she’s tangled up in all this, too? Nikki and Victoria’s theory never really made any sense. As a result, Mariah will undoubtedly view the girls’ night gang’s behavior as impulsive and ridiculous.

While Mariah takes a stand, Nikki will continue her battle with the bottle. After sneaking a drink, Nikki tried to get herself back on track by talking to Jack (Peter Bergman) and attending an AA meeting. Unfortunately, staying on a dry path won’t be easy. The Young and the Restless spoilers say Nikki will slip up again, so this is all building toward some drunken, dangerous trouble.

Over with Lola (Sasha Calle), she’ll cook all her best recipes for Devon (Bryton James) and hope she impresses him. Fen (Zach Tinker) will happily step up as a waiter and try to earn Devon’s approval. He’ll want to catch Devon’s attention and maybe get his demo in front of him before long.

The dinner will likely be a huge success, so Lola may score an awesome job opportunity. Abby (Melissa Ordway) would love for Lola to be the new chef at her trendy new restaurant. If Devon approves, they can get this project started right away.