BY Heather Hughes on December 19, 2018 | Comments: one comment
Related : Soap Opera, Spoiler, Television, The Young and the Restless 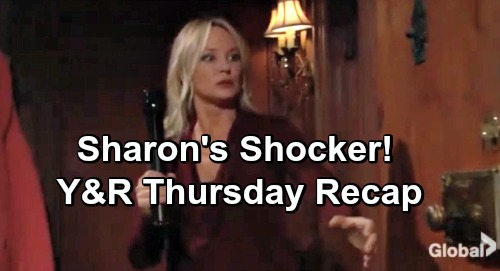 The Young and the Restless (Y&R) spoilers update and recap for Thursday, December 20, tease that Mariah (Camryn Grimes) remain fed up with Sharon (Sharon Case). During a night out with Tessa (Cait Fairbanks), Mariah will ignore several calls from her mom. She’ll finally answer one, but only to declare that a breakup’s not happening.

Once Mariah disconnects, Tessa will suggest that Sharon might’ve been trying to make amends. She’ll think Mariah should head over to the cottage and try to work things out. Mariah will take the advice, but she’ll scare Sharon by dropping a bag when she arrives. Sharon will think it’s an intruder, so she’ll be relieved when she opens the door and finds Mariah.

Y&R spoilers say Sharon will admit she’s on edge over Nikki’s (Melody Thomas Scott) accident. She’ll worry that this J.T. nightmare is never going to end. Mariah will settle in for a movie on the couch, but Sharon will want to talk instead. She’ll bring up Tessa and how her disapproval isn’t going to change.

Mariah will compare Sharon’s behavior to meddling Nikki over the years. She’ll push Sharon to just be happy for her and let it go. Meanwhile, Tessa will pick up some extra cash by helping Kyle (Michael Mealor). He’ll pay her to sing as part of his big surprise for Lola (Sasha Calle).

Unfortunately, Lola will be a no-show at the Abbott mansion. When Tessa suggests going over to Lola’s place instead, that’s exactly what they’ll do. The Young and the Restless spoilers say Lola will be fast asleep, but Tessa’s rendition of Joy to the World will awaken her. She’ll look out the window and see crazy Kyle standing outside without a coat.

Lola will offer an apology for nearly missing their date. She’ll buzz Kyle inside and they’ll lock lips as they cuddle in bed. Lola will eventually pump the brakes, so Kyle will promise it’s OK. He’ll let Lola know he just enjoys being close to her.

Other Young and the Restless spoilers say Ana (Loren Lott) will sneak Fen (Zach Tinker) in for a recording session. At the studio, Ana will confess that she likes Fen’s voice. She just won’t be keen on the songs he came up with. Ana will push Fen to do her material instead and they’ll lay down a few tracks.

Later, Devon (Bryton James) will show up and realize Ana was keeping him busy with a meeting. He’ll scold her and refuse to listen to Fen’s songs, but Ana will hit play and force him to listen. Devon will like what he hears, so he’ll decide to sign Fen to his streaming service. Unfortunately, Devon won’t let Ana stay on board as Fen’s producer.

Over with Victoria (Amelia Heinle), she’ll be grateful for Billy’s (Jason Thompson) support and help with the kids. Since Johnny (Holden and Ryan Hare) will put up a fight on singing in the Christmas pageant, Billy will coax him into it with some practice. Afterward, Billy will promise to be there for Victoria. He’ll contend that no matter what outcome Nikki faces, he’ll help her through it.