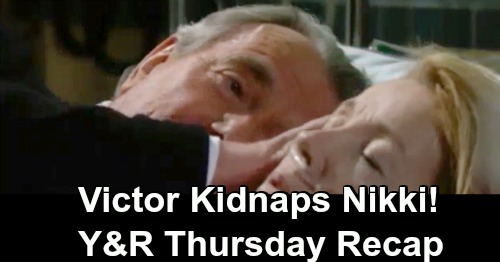 The Young and the Restless (Y&R) spoilers update and recap for Thursday, December 26, tease that Victor Newman (Eric Braeden) will make a promise. At the hospital, Victor will tell Nikki Newman (Melody Thomas Scott) that he has to leave.

However, he’ll reassure her about their future together. After Victor vows to reunite with Nikki soon, he’ll dash off before Nate Hastings (Brooks Darnell) appears.

Nate will be stunned when Nikki suddenly awakens. He’ll spread the news in the waiting area and give Nikki’s loved ones a belated Christmas miracle. Nate will warn Nikki that she still needs to rest, but he’ll allow her to visit with her family.

Nick Newman (Joshua Morrow) and Victoria Newman (Amelia Heinle) will happily rush to their mother’s side. They’ll be surprised when Nikki credits Victor with saving her. Jack Abbott (Peter Bergman) will also pop in and soothe Nikki’s drinking concerns. He’ll suggest that they’re going to attend some AA meetings and get everything under control again.

As Nate prepares to go home for the night, Nick will head out to his car with him. They’ll discuss Nikki’s incredible turnaround and how quickly it occurred. Once Nick is gone, Victor will reveal himself in the backseat. He’ll fear that the hit-and-run driver was trying to kill Nikki and might come back to finish her off.

Victor will hint at a plan that’s outrageous to Nate. He’ll think Victor’s insane for plotting this, but Victor will feel like it’s the only way to keep Nikki safe. Later, Phyllis Summers (Gina Tognoni) will join Victoria and Nick in Nikki’s room.

They’ll want to tell Nikki goodnight, but she’ll be missing from her hospital bed. It seems Victor will take drastic action with a little help from Nate!

Other Young and the Restless spoilers say Devon Hamilton (Bryton James) will bicker with his sister. Ana Hamilton (Loren Lott) will think Devon wants all the credit for discovering Fenmore “Fen” Baldwin (Zach Tinker). She’ll point out that she did all the work here.

Devon will suggest that Ana’s a talented gal, but that’s not enough to make a successful record. He’ll also bring up signing the writer of Fen’s new song, but Ana will insist that the person doesn’t want to be identified.

Once Fen and Ana are alone, Y&R spoilers say he’ll get her to make a confession. Ana will acknowledge that she wrote the song, but she won’t want to attach her name to it.

It turns out Ana ran into some trouble with a sneaky industry insider. He tricked her into signing her material over and robbed her of some great stuff. Ana will just want to do her thing behind the scenes, so Fen will promise to keep her songwriter secret.

Over with Lola Rosales (Sasha Calle), she’ll learn some shocking info about her Christmas gift. Lola appreciated the handbag Kyle Abbott (Michael Mealor) bought her, but she won’t be feeling as grateful on Thursday. Kerry Johnson (Alice Hunter) will compliment the purse and mention that it’s very expensive.

Afterward, Lola will confront Kyle about the bag’s $5,000 price tag. She’ll be appalled that he’d spend so much and it’ll lead to a huge fight over how different they are.

Since Kyle won’t think this is a big deal, Lola will argue that he doesn’t respect her. She’ll give him the handbag back and stomp off, so Kyle will call out to ask if they’re over.

Finally, Jack and Kerry will be ready for their Bora Bora adventure. The Young and the Restless spoilers say they’ll get their trip back on track, so it sounds like they’re about to grow even closer.