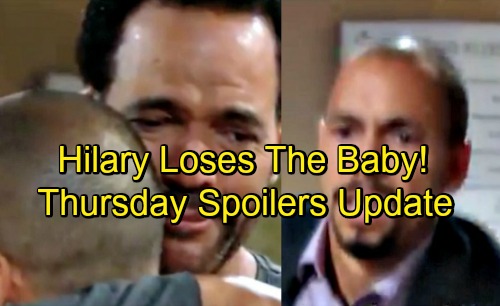 The Young and the Restless (Y&R) spoilers for Thursday, July 19, tease that Hilary (Mishael Morgan) and Lily (Christel Khalil) will be rushed to the hospital. Thankfully, Lily will won’t be seriously hurt. She’ll be cleared, so the doctors can focus on severely injured Hilary (Mishael Morgan). Charlie (Noah Alexander Gerry) didn’t take the hit in the backseat, so he’ll be just fine.

Meanwhile, Shauna (Camryn Hamm) will leave a message for Devon (Bryton James). She’ll also stop by Neil’s (Kristoff St. John) penthouse and insist that something terrible has happened. The Young and the Restless spoilers say Neil and Nate (Brooks Darnell) will head to the hospital with Shauna. Once they arrive, Nate will bicker with Hilary’s doctor and announce that he can take it from here.

Cane (Daniel Goddard) and Mattie (Lexie Stevenson) will be summoned by phone, so it won’t be long until they enter the waiting area. Charlie will take Cane aside and explain the car accident details. He won’t think Lily knows she ran a red light and caused it. Over with Nate, he’ll vow to save Hilary and her baby. Unfortunately, at least part of that plan will fail.

The Young and the Restless spoilers say Nate will deliver horrible news. Y&R fans won’t hear it just yet, but we know Hilary will have a miscarriage. Everyone will just hold out hope that Hilary will pull through. Across town, Nikki (Melody Thomas Scott) will set up a Newman summit. She’ll bring the family together and urge Nick (Joshua Morrow) to become partners with Victor (Eric Braeden).

Naturally, Nick will insist that it’s not happening. That’ll force the rest of the fam to pick a side. Summer (Hunter King) won’t want to bail on Fenmore’s, so she’ll pass on Nick’s offer. Abby (Melissa Ordway), on the other hand, will decide to go for it. She’ll feel like she hasn’t been treated fairly at Newman, so she’ll hope she can make a name for herself at Dark Horse.

Nikki will declare that Victor still has her support, so that’ll leave Victoria (Amelia Heinle). She’ll hold off on her answer until a bit later. Once everyone’s clear on the situation, Nick will reveal a secret ally. The Young and the Restless spoilers state that Jack (Peter Bergman) will step forward. He’ll be serving as an executive consultant as well as a board member.

Once Victoria’s alone with Victor, she’ll announce her terms. For starters, Victoria will want the COO position back. She’ll also expect Victor to hand over control when he retires. Victor will promise to put it in writing, so it sounds like Victoria will remain loyal to her father.