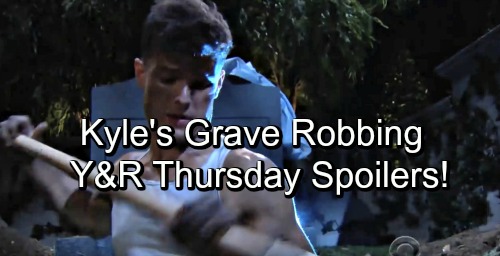 The Young and the Restless (Y&R) spoilers for Thursday, July 5, tease that Jack (Peter Bergman) and Kyle (Michael Mealor) will face a tricky task. Since they’re hoping to sue Jill (Jess Walton) and score a victory in court, they desperately need Dina’s (Marla Adams) testimony. She’s the only one who can confirm affair with Phillip Chancellor (Donnelly Rhodes) and provide a real reason for exhumation.

The mock trial they put on will bring mixed results. Dina will get off to a great start, but it won’t take long for disaster to strike. Confusion will bring out some strong, painful emotions. Jack will realize it could be risky to put Dina on the stand. She may not be able to handle the pressure of all this.

Kyle has grown fond of Dina, so he’ll agree that it’s probably too much for her. However, he won’t give up on pulling off this exhumation. Since they probably can’t get a judge to sign off, Kyle will want to take action himself. He’ll head to the cemetery with a shovel and start scooping away.

Will somebody catch Kyle digging in the graveyard? Regardless, it’s sure to be a wild, spooky night! Over with the cover-up crew, they’ll also be stuck in drama. The Young and the Restless spoilers say additional J.T. (Thad Luckinbill) information will surface. Perhaps his credit card will be used again or there’ll be another sighting across town.

Whatever the case, Victoria (Amelia Heinle) and the others should grow concerned. J.T. – or someone impersonating him – is getting closer. Friday’s Y&R episode will bring a shocking encounter for Nikki (Melody Thomas Scott) and Sharon (Sharon Case). They’ll freak once J.T. seemingly shows up outside the window, so Phyllis (Gina Tognoni) should struggle to keep their mouths shut.

Other Young and the Restless spoilers say Billy (Jason Thompson) will dive back into gambling. Summer (Hunter King) gave him a dangerous taste of an old addiction. It sounds like Billy will have a hard time controlling his desires, so that could lead to trouble.

Billy’s got a new yacht to potentially gamble away. There’s also plenty of money in his bank account to squander. Billy might win big, but he could just as easily become a huge loser! We’ll give you updates as other Y&R news comes in. Stay tuned to the CBS soap and don’t forget to check CDL often for the latest Young and the Restless spoilers, updates, and news.