BY Heather Hughes on June 13, 2018 | Comments: one comment
Related : Soap Opera, Spoiler, Television, The Young and the Restless 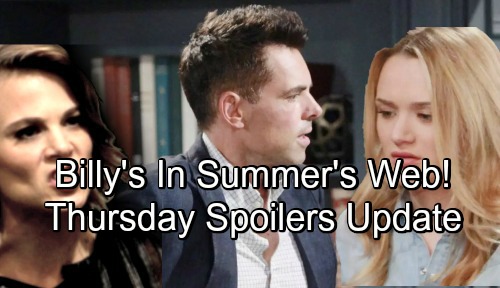 However, Hilary’s plans won’t pan out and that means she’ll have to be honest. At Crimson Lights, Hilary will confess that she could use some space. She’ll make it clear that she doesn’t want Shauna to move out. Hilary genuinely hopes to make a difference in the girl’s life, but she hopes to grow closer to Devon, too. She’s just struggling to balance her goals.

After Hilary explains everything, Shauna will understand and decide to pitch in. Charlie (Noah Alexander Gerry) will help her serve dinner for two back at the penthouse. The teens will exit once they’re done, so Devon and Hilary will have the place to themselves. The Young and the Restless spoilers say Devon will dance with Hilary and ultimately take her upstairs for lovemaking.

Over with Shauna and Charlie, they’ll enjoy a slightly less steamy moment. They’ll share a sweet kiss, so their romance is also on the right track. Elsewhere, Nick (Joshua Morrow) and Sharon (Sharon Case) will take Christian (Jude and Ozzy McGuigen) to the park. They’ll want to hang out with the tot before he goes to stay with Victor (Eric Braeden).

Nick will feel like he should’ve fought harder at the arbitration. He’ll let Sharon know that he’s done losing to Victor. From now on, Nick will plan to be just as ruthless as his father. Nick’s rage will build after they return home. He’ll pack up Christian’s belongings and rant about Victor’s latest move.

At the athletic club, Nick will find Victor and scold him for not prepping for Christian at the ranch. Victor will insist that his employees can handle it, which will just irritate Nick even more. Nick will give Victor some instructions regarding Christian, but he’ll add that he should probably tell the nanny. He’ll be certain that Victor won’t be very hands-on.

As his anger explodes, The Young and the Restless spoilers say Nick will declare war on Victor. He’ll insist that it’s time for Victor to start losing. Later Victor and a nanny will drop by the cottage. After an emotional goodbye with Christian, Nick will once again make his position clear. He’s going to make Victor pay, so Gramps had better be ready!

Meanwhile, Summer will eavesdrop on Phyllis and Billy’s (Jason Thompson) debate. Billy will bring up the idea of moving out again, but Phyllis will stand her ground. She’ll think she needs to stay at the apartment and turn things around for Summer.

Afterward, Summer will clash with Phyllis and flirt with Billy. She’ll try to score a Jabot job, but Billy won’t go for the idea. Y&R spoilers say Summer will end up getting a marketing position from Lauren (Tracey E. Bregman). She’ll tell Billy that she’s going to be close by, so they can have more fun soon.

It sounds like Summer’s playing a dangerous game and Billy’s stuck in the middle of it! We’ll give you updates as other Y&R news comes in. Stick with the CBS soap and don’t forget to check CDL often for the latest Young and the Restless spoilers, updates, and news.