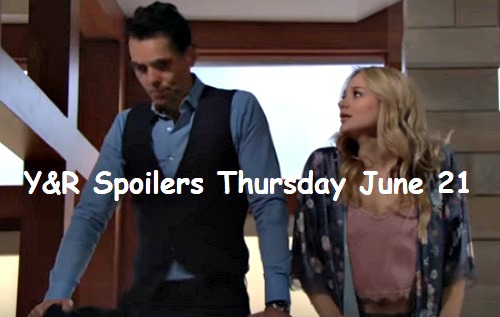 The Young and the Restless (Y&R) spoilers for Thursday, June 21, tease that some temptation’s headed Billy’s (Jason Thompson) way. Naturally, Summer (Hunter King) will be responsible. From the moment she returned to town, she’s been a thorn in Billy’s side.

This time Summer will set up an internal battle. She’ll force Billy to fight his inner demons after she arranges poker night at the apartment. At first, Billy will try to stay strong. He left his gambling addiction behind, so he won’t want to go down that road again. Billy will do his best to avoid the card table and focus on something else.

Unfortunately, Y&R spoilers say Summer won’t let it go. She’ll argue that there’s no harm in having some fun, so Billy will ultimately cave in. You can bet he’ll regret this game later, especially if Summer uses their secret as leverage!

Meanwhile, Ashley (Eileen Davidson) will do some snooping. She’ll most likely hear about Newman’s latest threat, so it’ll be time to take action. Victor (Eric Braeden) and Victoria (Amelia Heinle) may mention the warning as well as the boxes of confidential info. All of that arrives in Wednesday’s episode, so the company will be in crisis mode on Thursday.

The Young and the Restless spoilers say Ashley will launch an investigation. She’ll want to do her part to save Newman Enterprises. However, it may be tough to find any leads. The schemer behind this mess must’ve covered his or her tracks.

Nick (Joshua Morrow) would be a logical culprit, but we can’t rule out more shocking characters either. Regardless, things aren’t looking good for Newman. They’re under attack, so Victor needs to handle this as soon as possible.

Elsewhere, Abby’s (Melissa Ordway) worries will intensify. Nikki (Melody Thomas Scott) recently planted some doubts about Arturo (Jason Canela), so Abby will choose to pump the brakes. She’ll catch Arturo off guard when she suddenly pulls back from this romance.