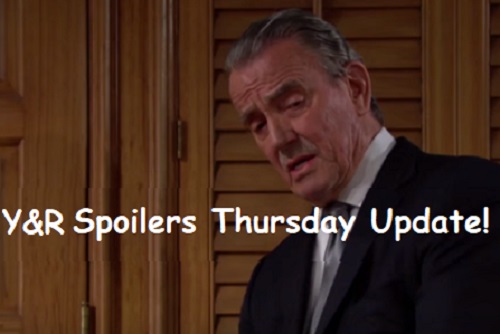 The Young and the Restless (Y&R) spoilers for Thursday, June 28, tease that Cane (Daniel Goddard) will be anxious to thwart Jack’s (Peter Bergman) plans. He knows Jack’s determined to dig up Phillip Chancellor’s (Donnelly Rhodes) body, so he’ll rev up his fight to stop it. Cane will visit Billy (Jason Thompson) and push him to contact Jill (Jess Walton). He may want to make sure she doesn’t cave.

Billy will assume that Cane’s battling major fears. Jack could come after Chancellor Industries if his hunch is proven right. Later, Y&R spoilers say Cane will try to relax with Lily (Christel Khalil). They’ll share wine under the stars and lock lips afterward.

Meanwhile, Victoria (Amelia Heinle) will find Phyllis (Gina Tognoni) and admit she’s worried. When Victoria suggests J.T. (Thad Luckinbill) might’ve returned, Phyllis will offer reassurance. She’ll promise Victoria that J.T.’s dead, so there must be some other explanation. Once Summer (Hunter King) spots them together, she’ll comment on their strange friendship.

Phyllis will start bickering with her daughter soon enough. She’ll criticize Summer’s wardrobe choice and get an insult in return. Afterward, Billy (Jason Thompson) will come home to find Phyllis alone. They’ll give the neighbors a sexy show on their balcony, but Billy will miss some messages during the lovemaking. He’ll realize Summer’s desperate to get in touch with him.

After giving Phyllis a bogus excuse, Billy will track Summer down. She’ll confess that she’s lost some money in a poker game. Summer will ask Billy for $10,000 in hopes of digging out of her hole. After he takes her spot at the table, he’ll win big and earn Summer’s gratitude.

However, there’ll be more to the story. It turns out this wasn’t about settling up at the table. Summer will admit she’s gambled away her inheritance, so she’s drowning in debt. Elsewhere, Victor (Eric Braeden) will decide he needs to do a public interview. He’ll want to go on TV and set the record straight.

After Mariah (Camryn Grimes) and Hilary (Mishael Morgan) do some prep work, Victor’s request will be granted. Unfortunately, this interview won’t go as planned. The Young and the Restless spoilers say Victor will insist that he’s recovered, but his behavior will suggest otherwise. His unsteady hand will drop a glass and he’ll struggle to focus on what he’s trying to convey.

Victor will also go on a tirade in the middle of the interview. He’ll rant about J.T.’s actions and push the coward to come out of hiding. Once Victor calms down, he’ll have a hard time answering the remaining questions. This interview probably won’t do him any favors in the end!