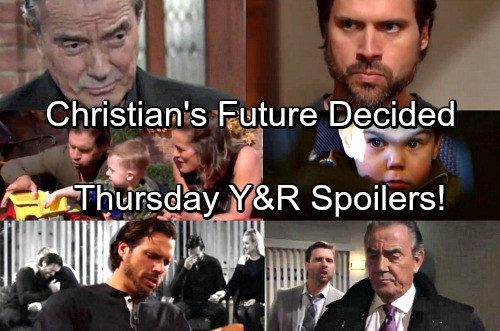 The Young and the Restless (Y&R) spoilers for Thursday, March 1, tease that Nick (Joshua Morrow) and Victor (Eric Braeden) will find common ground. They’ll reach an agreement that could improve their relationship somewhat. On Wednesday, Nick gets DNA confirmation that Christian (Jude and Ozzy McGuigen) isn’t his son. That could leave him in a dark place on Thursday.

Nick may be feeling too distraught to fight Victor right now. He hadn’t recovered from Chelsea’s (Melissa Claire Egan) departure when he was hit with the paternity blow. Since Victor tends to be aware of nearly everything in Genoa City, will Nick assume his father knew all along? If so, Nick might be mildly grateful that Victor tried to protect his strong bond with Christian.

Regardless, Nick will probably agree to let Victor play more of a role in his grandson’s life. Christian has gone through plenty of moms and dads since he was born. It couldn’t hurt to give him the stability of a loving grandparent. Victor certainly has his fair share of flaws, but Y&R fans know he truly loves his grandkids.

Other Young and the Restless spoilers say Nikki (Melody Thomas Scott) will get some big news. She’ll discover that Victor helped Chelsea with a cover-up. Nikki will hear all about how Victor resolved the Fenmore’s drama. He tried to sweep Chelsea’s crimes under the rug to protect a far worse secret.

Since the paternity chaos is exploding, perhaps Nikki will also get updates on that. That might give her a deeper understanding of why Victor did what he did. Elsewhere, J.T. (Thad Luckinbell) will get guidance from Lily (Christel Khalil). He’s currently facing a custody battle with Mac (Kelly Kruger) as well as constant conflict with Victoria (Amelia Heinle). J.T. could definitely use some solid advice.

Maybe Lily will mention her own relationship struggles and how she worked to overcome them. It’s been a tough fight, but a little understanding can go a long way. Will J.T. listen to what Lily has to say? We’ll keep you posted as other Young and the Restless details emerge. Stay tuned to Y&R and don’t forget to check CDL often for the latest Young and the Restless spoilers, updates and news.