BY Heather Hughes on May 16, 2018 | Comments: 2 comments
Related : Soap Opera, Spoiler, Television, The Young and the Restless 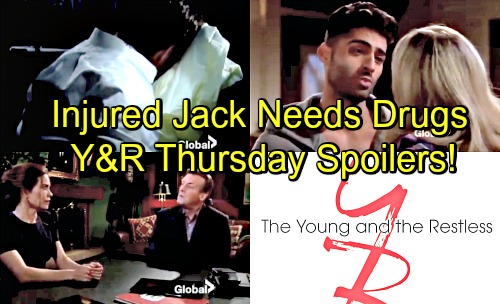 The Young and the Restless (Y&R) spoilers for Thursday, May 17, tease that Victoria (Amelia Heinle) will spin quite a tale to Paul (Doug Davidson). She’ll admit she saw J.T. (Thad Luckinbill) the night of the party. That much is true! However, Victoria will add plenty of bogus details to sell her story. She’ll suggest J.T. came clean about all the Victor (Eric Braeden) drama and begged to run away as a family.

Victoria will claim she turned J.T. down, but she still wanted to help him. She’ll lie that she gave J.T. some cash so he could vanish. Paul won’t seem entirely convinced, but he’ll eventually end the grilling session. Meanwhile, Jack (Peter Bergman) will be all bloodied up on the side of the road. He’ll be unconscious thanks to that car crash on Wednesday.

At the cabin, Abby (Melissa Ordway) and Arturo (Jason Canela) will put the brakes on their steamy moments. They’ll create a little distance and continue getting to know each other. Abby will feel like this trip was a waste of time since they didn’t find Jack. Arturo, on the other hand, will hint that he liked forming a connection. He’ll flirt and put a smile on Abby’s face.

The next morning, an injured Jack will drag himself back to the cabin. Nikki (Melody Thomas Scott) will be relieved when Jack gives her a call. She’ll note that Ashley’s (Eileen Davidson) been looking for him, which will set Jack off. He’ll hang up and turn the Abbott family photo frames face down. Jack will also call up someone who can get him some pain pills ASAP.

Back with Victoria, she’ll bump into Paul. Y&R spoilers say he’ll wonder about J.T.’s location, but he won’t get any other info. Victoria will insist she knows nothing more than what she’s revealed. Afterward, Paul will contact Christine (Laralee Bell) and contend that Victoria may be lying.

At the Abbott mansion, Nikki will show up and get a shock. She’ll seem upset to see Arturo with Abby. Once Nikki fills Abby in on Jack’s phone call, she’ll speak with Arturo privately. Nikki won’t want Arturo to date Abby, but he won’t think it’s any of her business. It looks like Nikki’s battling some jealousy, but she’ll just have to get over it!

Across town, The Young and the Restless spoilers say Hilary (Mishael Morgan) will be green with envy as well. Devon (Bryton James) will head off to a breakfast meeting with a mystery woman, so Hilary will naturally be curious. Later, Devon will assure Hilary that they kept things strictly professional.

Hilary will get a pleasant surprise when Devon’s associate delivers nursery plans. That’s what the meeting was about, so Hilary will be overcome with emotion. This should mark another big step forward for “Hevon.” We’ll give you updates as other Young and the Restless news comes in. Stick with Y&R and don’t forget to check CDL often for the latest Young and the Restless spoilers, updates, and news.