BY Heather Hughes on May 23, 2018 | Comments: one comment
Related : Soap Opera, Spoiler, Television, The Young and the Restless 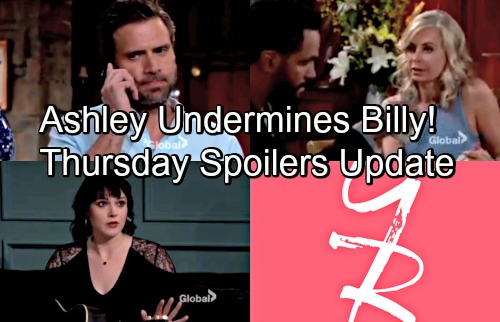 The Young and the Restless (Y&R) spoilers update for Thursday, May 24, tease that Ashley (Eileen Davidson) will worry about Billy’s (Jason Thompson) objectives. She’ll feel like he’s overly ambitious, but he’ll remain confident. Later, Kyle (Michael Mealor) and Billy will chat about having each other’s backs. Nevertheless, Kyle will want Billy to ditch the blood-Abbott clause and reinstate Jack (Peter Bergman).

Billy will argue that Jack’s in bad shape and doesn’t need to be running Jabot right now. He’ll suggest that Kyle can still be a team player. Billy will push him to do some renegotiations at Hamilton-Winters. Kyle will point out that Jack already secured a great deal, but he’ll go along with Billy’s wishes.

At Sharon’s (Sharon Case) house, Mariah (Camryn Grimes) will hear about Nick’s (Joshua Morrow) potential return to Newman. She’ll understand Nick’s desire to make a comeback as well as Sharon’s reservations. Once Nick’s alone, he’ll call Phyllis (Gina Tognoni) over to fill her in. She’ll think he’s crazy for wanting to get back in Victor’s (Eric Braeden) grasp.

After Sharon reappears, she’ll be glad Phyllis is on her side. The Young and the Restless spoilers say Phyllis will also get the reunion news. She won’t be shocked that Sharon and Nick are seeing each other again. Since this is a day of remembrance for Cassie (Camryn Grimes), Phyllis will opt to keep her complaints to herself.

In the stables, Nick will gaze at Cassie’s picture and wonder what she’d want him to do. Sharon will join him and promise to support him no matter what. They’ll share some emotional moments as they reflect on memories of Cassie. Nick will eventually take Sharon to the coffeehouse and they’ll slow dance. He’ll reveal that he has to trust his heart and go back to Newman Enterprises.

Other Y&R spoilers say Ashley will open up to Neil (Kristoff St. John). She’ll have concerns about Billy’s sudden CEO gusto. Ashley will mention how she wants to eliminate the blood-Abbott clause and put the best candidate in the top spot. Neil will suspect Ashley’s talking about herself, but she won’t come right out and admit her sneaky agenda.

Afterward, Neil will have a business discussion with Kyle. Once they go over the terms of Hilary (Mishael Morgan) and Jack’s deal, Kyle will exchange introductions with Tessa (Cait Fairbanks). Mariah will show up hoping for a girls’ night out with Tessa. They’ll plan to grab some dinner and catch a movie, but Kyle will awkwardly invite himself.

When Mariah gets called away for work, Kyle will ask Tessa if it can be just the two of them. She’ll politely turn down the date. Back at Jabot, Ashley will find Billy’s door locked. He’ll be busy having sex with Phyllis in his office. After they’re finished, Ashley will come in and make some smart remarks. She’ll want Billy to take a look at her business proposal, but he’ll insist on doing it later.