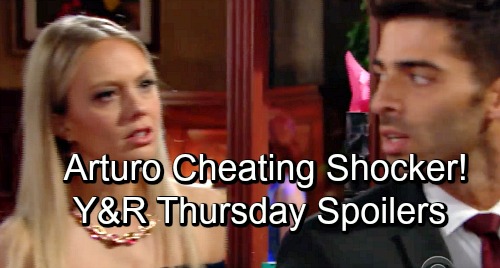 The Young and the Restless (Y&R) spoilers for Thursday, November 15, tease that a shocker’s headed straight for Abby (Melissa Ordway). She’s been suspicious about the conflict between Rey (Jordi Vilasuso) and Arturo (Jason Canela), but she hasn’t been able to nail down a solid reason yet. As of Wednesday’s episode, now Mia’s (Noemi Gonzales) stirring the pot and trying to be Abby’s new bestie.

Y&R’s setting the stage for a huge blowup and it’ll happen at the Jaboutiques launch party. The Young and the Restless spoilers say Rey, Arturo and Mia will get into a heated argument. Lola (Sasha Calle) will end up watching the drama unfold in the distance. She’ll be busy with catering work, but she’ll have to take a break for all the family chaos.

In the heat of the moment, Mia will blurt out that Rey’s the reason she had an affair with Arturo. That’s when Abby will appear and wonder if it’s true. She’ll get an admission from Arturo soon enough, so that’ll change everything. Abby has done her fair share of cheating, so she really has no room to talk. Nevertheless, it’ll leave her questioning her relationship along with Arturo’s loyalty.

Other Young and the Restless spoilers say Jack (Peter Bergman) will make some smooth moves. He’ll do his best to be charming around Kerry (Alice Hunter), so Y&R may be gearing up for a new couple. Jack’s real goal might be making power plays at first, but love could certainly bloom out of that. The show tends to pair Jack with women younger than him, so Kerry seems like a reasonable option.

Meanwhile, Sharon (Sharon Case) and Billy (Jason Thompson) will prepare for battle. Nick (Joshua Morrow) and Phyllis (Gina Tognoni) want to cement their place at Genoa City’s latest power couple, but Billy and Sharon will try to steal the spotlight. They’ll fake sparks to make “Phick” fume and gain attention from the crowd.

This Jaboutiques bash will definitely be one to remember! We’ll give you updates as other Y&R news comes in. Stay tuned to the CBS soap and don’t forget to check CDL often for the latest Young and the Restless spoilers, updates and news.