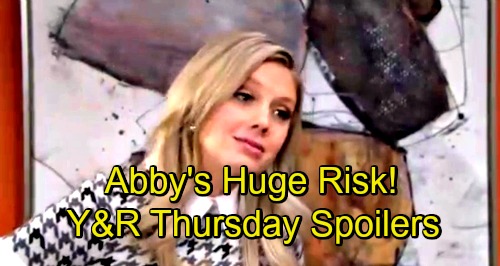 The Young and the Restless (Y&R) spoilers for Thursday, November 29, tease that Summer (Hunter King) will face some challenging circumstances. She recently accepted a job working under Victor (Eric Braeden) in Dubai, but Phyllis (Gina Tognoni) wasn’t too happy about it. In fact, Phyllis ripped up the resignation letter and declared Summer would work for Victor over her dead body!

This is a golden opportunity for Summer, who could quickly be groomed to take over that Newman office. However, Phyllis just doesn’t see it that way. She feels like nothing good can come from Summer working for her manipulative grandfather. Phyllis and Victor have obviously had their fair share of issues over the years, so she won’t want Summer stuck in his grasp.

Will Phyllis sweeten the pot for Summer where she’s at instead? Summer might be tempted by a promotion at Fenmore’s or even a major upgrade at Jabot. Phyllis will undoubtedly do whatever she can to keep Summer from bailing. The alternative is letting Summer go get brainwashed in the ways of dirty Newman business tactics.

Nevertheless, Summer doesn’t want to spend her days staring at Kyle (Michael Mealor) and pining. She’d rather get out of Genoa City and use this chance to get ahead in her career. Will Summer leave against Phyllis’ wishes? Nick (Joshua Morrow) will get involved in this mess soon, so Summer will have quite a battle on her hands.

Other Young and the Restless spoilers say Abby (Melissa Ordway) will do something gutsy. After a business deal doesn’t pan out on Wednesday, Abby gets some encouragement from Arturo (Jason Canela). She’ll use that encouragement as fuel for change in Thursday’s episode. Y&R fans can expect Abby to take the bull by the horns, so we’ll see if her risky decision pays off.

While Abby takes steps toward her goal, Arturo will be drawn back into an ex nightmare. Mia (Noemi Gonzalez) just won’t be able to resist causing trouble. She’ll mess with Arturo and leave him fuming, but could she leave him turned on, too? There’s a fine line between love and hate, so these former flames are playing with fire!