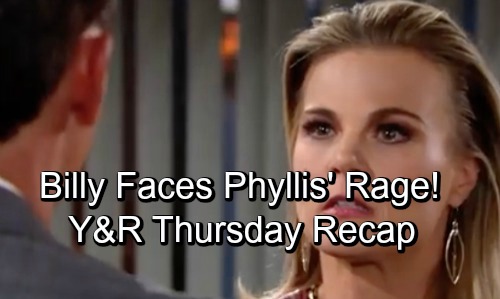 The Young and the Restless (Y&R) spoilers update and recap for Thursday, October 18, tease that Summer (Hunter King) will lash out over Billy’s (Jason Thompson) revenge. She’ll think he’s just as horrible as Phyllis (Gina Tognoni), so she’ll contend that they deserve each other. After Summer stomps off, Phyllis will take her turn with Billy. She’ll deliver a good slap and rant about how he used her daughter to get back at her.

Phyllis will be appalled by his behavior, but Billy will note that it’s what he wanted. He’ll seethe about the Nick (Joshua Morrow) hookup and suggest Phyllis will have to live with a horrific mental image, too. Meanwhile, Kyle (Michael Mealor) will admit he hasn’t been great about texting Lola (Sasha Calle) back. He’ll want to make it right, so he’ll offer to jet Lola off somewhere exciting.

Instead, Lola and Kyle will end up having a double-date night with Mariah (Camryn Grimes) and Tessa (Cait Fairbanks). After the gang arrives at the Abbott mansion, they’ll have a not-so-great game of charades. They’ll shift to truth or dare instead, so Young and the Restless fans can expect some confessions.

Once Lola picks truth, Kyle will wonder about something she did wrong and regrets. Lola will reflect on tricking a used car salesman she once worked for. He didn’t pay her for a month and tried to fire her when she pushed for the cash. Lola saw potential in the old food truck on his lot, so she worked out a deal for it. Little did the guy know she stole parts from his other vehicles to get it up and running.

When pressed, Lola will admit she doesn’t really regret it! Next, Mariah will confess to impersonating Cassie (Camryn Grimes) and haunting Sharon (Sharon Case). Of course, Tessa’s big regret will be stealing Mariah’s journal and using it for a hit song. Before their night can go any further, a weepy Summer will show up seeking Kyle’s support.

Naturally, Kyle will blow off Lola to help. She’ll return the favor by bailing with Tessa and Mariah. They’ll head to the athletic club and debate Summer’s true motives. Mariah will think “Snowflake” is just looking for attention, but Tessa will point out that she might really be in crisis mode. Even so, Lola won’t see why Kyle had to be her confidant.

Back with Summer, she’ll open up about the Billy drama and the mess she made. Kyle will advise Summer to face what she’s done. He’ll think she can do whatever she sets her mind to. Y&R spoilers say Summer will track down Phyllis and offer an apology. The distraught mother-daughter duo will hug it out and agree that they’re both better off without Billy.

Kyle will go looking for Lola, but he’ll find only Tessa and Mariah. He’ll learn that he screwed up big time, so it sounds like damage control’s brewing. Meanwhile, Nate (Darnell Brooks) will visit Lily (Christel Khalil) and ponder why Cane (Daniel Goddard) skipped seeing her. He’ll corner Cane later and find out the real reason why.

Nate will be furious with Cane for trying to avoid Lily. He’ll get that it’s hard to see her like that, but it’s no excuse. Nate will snarl that Cane needs to get over it before things get even tougher. Afterward, Cane will run into Billy and they’ll commiserate over their problems. Billy won’t be sorry that Phyllis is out of his life, but he’ll admit that he went too far. He’ll insist there’s no coming back from it.