The Young and the Restless Spoilers: Thursday, September 13 Recap – Lily and Devon Make Up – Nikki Fears Jack Is Victor’s Brother

BY Heather Hughes on September 12, 2018 | Comments: one comment
Related : Recap, Soap Opera, Spoiler, Television, The Young and the Restless 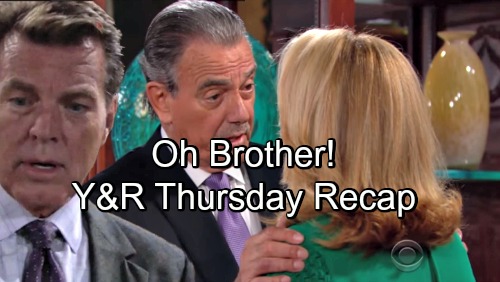 The Young and the Restless (Y&R) spoilers update and recap for Thursday, September 13, tease that Lily (Christel Khalil) will seem glum. At Walworth, she’ll gaze at herself in the mirror and sit down to think. After Charlie (Noah Alexander Gerry) comes home, he’ll join Mattie (Lexie Stevenson) and Cane (Daniel Goddard) as they visit Lily behind bars. An unexpected family member will show up a little later.

Once Devon (Bryton James) arrives, he’ll get some alone time with Lily. Devon will sense that Lily’s miserable and express guilt for putting her there. Lily will mention a charity she wants to start in Hilary’s name. She’ll want to do some good, but Devon will think Lily’s already got a great heart. He’ll insist that Hilary’s death was just a tragic accident.

After Devon takes back all the hurtful things he said, Lily will wonder if he’s offering forgiveness. Devon will assure Lily that it’s not necessary. He now believes there’s nothing to forgive. As Devon hugs a sobbing Lily, the rest of the fam will return. There’ll be smiles all around thanks to this pleasant development.

Other Y&R spoilers say Nick (Joshua Morrow) and Rey (Jordi Vilasuso) will have a chat. After Nick reiterates that he hasn’t be in touch with J.T. (Thad Luckinbill), Rey will suggest that he should buy him a beer. He’ll be impressed at the way Nick took on Victor (Eric Braeden) with that sabotage scheme. Rey and Nick will be on the same page about bringing J.T. to justice.

At The Dive Bar, Nikki (Melody Thomas Scott) will grill Victor (Eric Braeden) about his disturbed demeanor. She’ll think he looks like he’s just seen a ghost. It’ll take some work to pry it out of him, but Victor will finally admit what’s up. He’ll note that the mystery man in the photo is his own father, Albert Miller (George Kennedy).

The Young and the Restless spoilers say Nikki will be stunned by the news. She’ll realize Jack (Peter Bergman) could be Victor’s half-brother. At Crimson Lights, Summer (Hunter King) will gripe about Kyle (Michael Mealor) blowing her off. She’ll give him her usual attitude until he makes a confession. Kyle will suggest that a hookup just wasn’t enough. Summer matters more to Kyle than a one-night stand.

Later, Summer will contend that she loves Kyle like a brother (but she was ready to sleep with him???). He’ll be hurt, so he’ll feel like it’s best to steer clear of each other from now on. Meanwhile, Mariah (Camryn Grimes) will confide in Sharon (Sharon Case). She’ll bring up Tessa’s (Cait Fairbanks) love declaration, which will get another warning from her mom. Sharon will just want Mariah to be careful with her heart.

Next, Rey will approach Sharon and do his best to make amends. Sharon won’t trust Rey after the stunt he pulled, but he’ll hope they can start fresh. Afterward, Mariah will bid Tessa farewell for now. She’ll have to dash off on a GC Buzz trip, but they’ll share a close moment before she goes.

Once Sharon and Nick are settled at home together, a call will come in. Tessa will be on the other end asking about the espresso machine. Suddenly, Sharon will hear Tessa struggling with someone. She’ll call out Tessa’s name as a scream echoes in the phone.

At the police station, Rey will face backlash from Paul (Doug Davidson). He’ll defend his decision to give Nick full immunity with Christine’s (Laralee Bell) approval. Paul will at least be glad they got some info out of all this. Rey will point out that as far as they know, J.T. was last spotted at Victoria’s (Amelia Heinle) place.