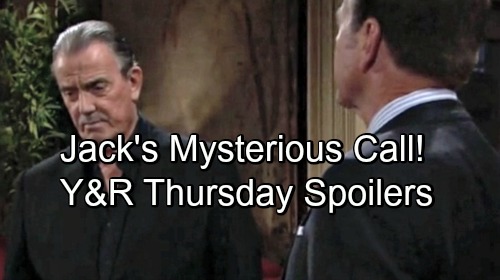 The Young and the Restless (Y&R) spoilers for Thursday, September 20, tease that Nikki (Melody Thomas Scott) will face a dilemma. She’ll find herself caught between her husband and a close friend. Jack (Peter Bergman) will want a DNA test, but Victor (Eric Braeden) will refuse to grant his request. As a result, Nikki will be the next stop on Jack’s list.

Jack will hope Nikki can provide Victor’s toothbrush or perhaps a hair sample. Nikki won’t really give the idea much thought. She’ll realize things would get ugly if she betrayed Victor like this, so she’ll turn Jack down flat. Of course, Nikki will feel guilty about hindering Jack’s search for answers. She’ll understand that this is a tough situation for him, but she just won’t be able to help.

Y&R spoilers say Jack won’t give up on his mission. He’ll try to steal Victor’s used napkin from the athletic club, but a snag will emerge. Devon (Bryton James) will catch him in the act, so Jack will abandon that plan and consider his last resort. He’ll dial a number and request some assistance, so it sounds like he’ll call Matt Miller (Richard Gleason). Jack will hope Victor’s brother can enlighten him.

Other Young and the Restless spoilers say Shauna (Camryn Hamm) will feel the love. After Devon finds out it’s Shauna’s birthday, he’ll throw together a quick bash. Devon will want Shauna to know she’s got people who care about her.

After Charlie (Noah Alexander Gerry) and Mattie (Lexie Stevenson) join the fun shindig, Devon will make a moving speech. He’ll insist that Hilary (Mishael Morgan) would be so proud of Shauna and what she’s accomplished. Devon will be grateful for the chance to know Shauna and keep that bond she felt with Hilary alive.

The Young and the Restless spoilers say Devon’s life is looking up. His heart seems to be healing, which is definitely a good thing. It’ll be a while before Devon’s truly ready to move on, but he’s headed in the right direction. We’ll give you updates as other Y&R news comes in. Stay tuned to the CBS soap and don’t forget to check CDL often for the latest Young and the Restless spoilers, updates and news.