The Young and the Restless Spoilers: Thursday, September 27 – Phyllis’ Stops The Confessions – Sharon Leans on Rey 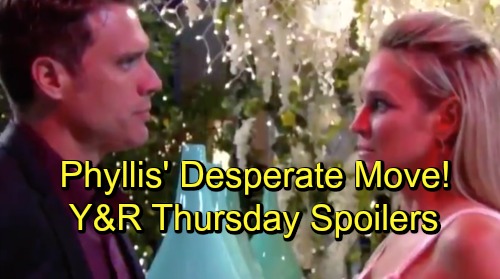 The Young and the Restless (Y&R) spoilers for Thursday, September 27, tease that Phyllis (Gina Tognoni) will decide to take action. In Wednesday’s episode, the rest of the cover-up crew’s upset about Sharon’s (Sharon Case) plan. She intends to tell Nick (Joshua Morrow) the truth about J.T. (Thad Luckinbill), which could obviously spell disaster.

Since Nick wants to divulge his one-night stand secret as well, Phyllis is poised for a double whammy! She’s certainly not interested in letting either secret fall into the wrong hands. As a result, it looks like Phyllis may put a stop to the mutual “Shick” confession. Thursday’s episode will bring a surprising twist for Y&R viewers.

The Young and the Restless spoilers say Phyllis will sound the alarm, which could mean she’ll literally pull a fire alarm somewhere. That move would be right up Phyllis’ alley! If not, she could surely cause some other distraction and delay the admissions. By the time things calm down, Sharon and Nick will probably have reconsidered this whole honesty idea.

However, Sharon will be at least partially truthful with someone else. She’ll choose to confide in Rey (Jordi Vilasuso) on Thursday. Will this choice be dangerous or beneficial? There’s a chance it could be a bit of both. It’s risky to reveal anything at all to Rey right now, but Sharon will also be showing him her heart.

As Rey softens toward Sharon, he could become less eager to take her down. The same goes for the rest of the cover-up crew. Rey’s trying to build some fake trust between them, but Sharon could make it genuine. She may divulge her concerns about Nick’s personality changes and all the decisions he’s making unilaterally.

Other Young and the Restless spoilers say Billy (Jason Thompson) will sink lower than ever. He’ll feel the walls closing in thanks to his gambling debts. Billy won’t know how he’s going to get out of his current jam. He’ll admit just how bad it is to Phyllis soon, but she may not be able to help. At this point, Billy may just have to let it all blow up in his face.

It sounds like another fantastic episode’s on the way. We’ll give you updates as other Y&R news comes in. Stay tuned to the CBS soap and don’t forget to check CDL often for the latest Young and the Restless spoilers, updates, and news.