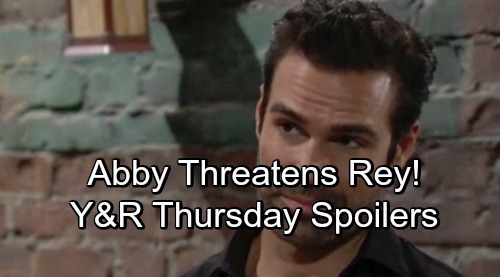 The Young and the Restless (Y&R) spoilers for Thursday, September 6, tease that Nick (Joshua Morrow) will come home from his business trip. He’ll undoubtedly get the scoop on Tessa’s (Cait Fairbanks) return as well as Sharon’s (Sharon Case) suspicions. Despite Mariah’s (Camryn Grimes) faith in Tessa, Sharon can’t help but feel like this is a disaster waiting to happen.

Nick may weigh in with his own thoughts on the matter, but he’ll have something more important on his mind. He’ll probably want to talk about the “Shick” nuptials and any other preparations they have left to make. Sharon and Nick’s wedding day will be here before you know it! They need to kick their plans in high gear and be sure that everything’s squared away.

Of course, Nick won’t let the chaos get in the way of his happiness. He’ll insist that he loves Sharon and wants to spend the rest of his life with her. The Young and the Restless spoilers state that Nick will make a vow in Thursday’s episode. He might tell Sharon that they’ll stick together no matter what.

Nick could also make some sort of promise regarding honesty. They’ve been dealing with some trust issues lately, so Nick might argue that he’s going to be truthful from now on. Unfortunately, past lies will catch up with both Nick and Sharon eventually. Their secrets are set to explode, so Y&R fans should stay tuned.

Other Young and the Restless spoilers say Rey (Jordi Vilasuso) will face a pest on Thursday’s new Y&R episode, September 6. Abby (Melissa Ordway) wants answers about Rey and Arturo’s (Jason Canela) feud, so she’ll work hard to get them. After approaching Rey, Abby will demand to know what he’s keeping under wraps.

Rey’s hiding many shockers, but Abby will just worry about the ones that involve Arturo. When Rey’s reluctant to open up, Abby will offer a stern warning. She’ll make it clear that Rey had better not rock the boat for his brother. If Rey can’t be kind, Abby will probably think he should just avoid Arturo altogether.