BY Heather Hughes on September 5, 2018 | Comments: one comment
Related : Soap Opera, Spoiler, Television, The Young and the Restless 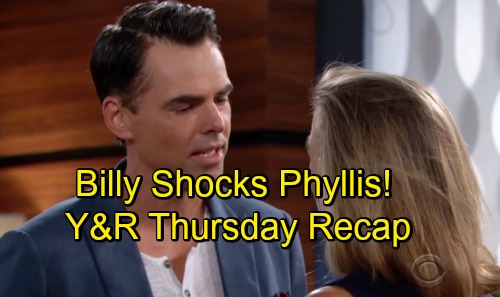 The Young and the Restless (Y&R) spoilers and recap for Thursday, September 6, tease that Sharon (Sharon Case) will greet Nick (Joshua Morrow) in sexy lingerie. She’ll give Nick a warm welcome home from his trip by making love to him. Later, they’ll chat at Crimson Lights. Sharon will have some good news about her college courses. She got her final grades, so graduation is imminent.

Nick will think this calls for a celebration in a brand-new house, but Sharon will continue to drag her feet. When Abby (Melissa Ordway) walks in, she’ll be bummed that Arturo (Jason Canela) didn’t return with Nick. He texted that he had a little more work to do, so Abby will be left waiting. She’ll suspect that Rey’s (Jordi Vilasuso) the reason why. Once Rey appears, Abby will have a chance to confront him.

The Young and the Restless spoilers say Abby will bring up Rey and Arturo’s feud. She can tell Arturo’s been avoiding his brother, so she’ll demand answers. Rey will suggest that Arturo told the truth about working. He’ll hint that Abby’s going to get hurt if she keeps thinking with her heart instead of her head.

Back at the cottage, Nick will mention a house he’s interested in. Sharon will maintain that she wants to stay put, so Nick will wonder what’s really going on. Y&R spoilers say Sharon will come clean about her concerns. She’ll feel like Nick’s changed since he started Dark Horse. Sharon will feel like everything’s about Victor (Eric Braeden) and trying to prove himself.

Nick will be glad that Sharon was truthful. He’ll promise that he’s done showing off and attempting gain the upper hand. Talk will turn to Rey, who Sharon recently grilled over dinner. She’ll warn Nick that Rey’s investigating J.T.’s (Thad Luckinbill) credit card debt, so they’ll have to be careful.

Other Young and the Restless spoilers say Summer will approach Billy (Jason Thompson). She’ll find him in his office and keep her plan going strong. Billy will make it clear that he’s not interested, especially when Summer’s just using him to hurt Phyllis (Gina Tognoni). He’ll rant about Summer’s immaturity before getting a text about a poker game.

A frustrated Summer will meet up with Kyle (Michael Mealor) and admit defeat. She’ll vow to give Kyle an all-night sex session so he can thoroughly enjoy his win. Back with Billy, he’ll pay Sinead (Lira Kellerman) to let him in the big tournament. After lying to Phyllis about another business trip, Billy will have a change of heart. He’ll insist that he can’t deal with the guilt of all this.

Billy will confess that he’s still gambling and doesn’t want to stop. He’ll be eager to see if he can compete at a higher level. Billy will ask if Phyllis can get behind him on this. Meanwhile, Kyle will fill Jack (Peter Bergman) on Dina’s (Marla Adams) little scare. He won’t think Phyllis should be blamed for losing track of her.

The father and son will also discuss Jabot, so Jack will offer a warning. He won’t think Kyle should get stuck in the middle of Billy and Ashley’s (Eileen Davidson) war. Jack will head to the Abbott mansion later, where Dina will be having a minor meltdown. Once Jack soothes her, Ashley will praise him for how good he is with his mother.

Despite Phyllis and Billy’s presence there, Jack will decide to move back in. He’ll want to be there for Dina and keep her comfortable. The Young and the Restless spoilers say Dina will retrieve an old photo album and bring it over to Jack. After Dina walks away, Jack will fret about the fantasy world she’s living in.

It looks like a picture from that album will prove crucial later this week. We’ll give you updates as other Y&R details emerge. Stay tuned to the CBS soap and don’t forget to check CDL often for the latest Young and the Restless spoilers, updates, and news.