BY Heather Hughes on July 11, 2018 | Comments: one comment
Related : Soap Opera, Spoiler, Television, The Young and the Restless 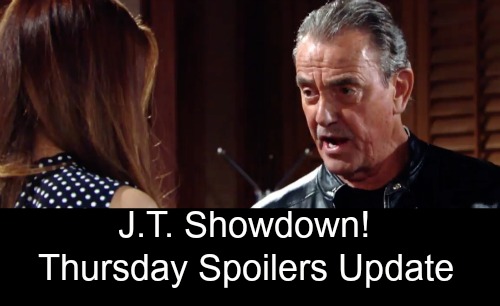 The Young and the Restless (Y&R) spoilers update for Thursday, July 12, reveal that a defeated Billy (Jason Thompson) will battle a hangover. He’ll fib to Phyllis (Gina Tognoni) about having too many drinks at his business dinner and reiterate that he was at Jabot. Phyllis will act like she believes Billy’s lies and dash off soon after.

That’ll leave Summer (Hunter King) to quiz Billy, who lost his last poker game and wants to try again. Summer will feel responsible for all Billy’s gambling and wonder where he’s going to get more cash. Billy will insist he’s going to figure something out. There’s a lot at stake, so he’ll do whatever he has to do.

At Jabot, Ashley (Eileen Davidson) will snoop for the yacht receipt in Billy’s desk. She’ll want to check on all the latest expenses, but Kyle (Michael Mealor) won’t be of any assistance. Instead, he’ll head over to Crimson Lights for a chat with Mariah (Camryn Grimes).

After Tessa (Cait Fairbanks) appears, Mariah will give her a smile and a wave. Y&R spoilers say Kyle will bring up their connection. He’ll urge Mariah to ask Tessa out, but she won’t be on board with the idea. Kyle will pile on the compliments, but Mariah will downplay her appeal as a girlfriend.

Later, Mariah will wonder if Summer has any dating tips. The Young and the Restless spoilers say Summer will tease Mariah about needing help, but she’ll eventually give it. Summer will insist that a little confidence could go a long way. While Mariah works on that, Summer will promise to handle a wardrobe upgrade.

Meanwhile, Kyle will pop in Hamilton-Winters. He’ll chat with Tessa about how he asked her out and got shot down. Kyle will point out that he never stood a chance thanks to Mariah. However, Tessa won’t want to rock the boat since they’re friends again. She’ll feel like they can’t hit the reset button romantically.

Back with Billy, he’ll lie to Phyllis about working late again. The Young and the Restless spoilers say Phyllis will reach out to Hilary’s (Mishael Morgan) private investigator a little later. She’ll be determined to get some answers about Billy’s shady behavior.

Billy will also make a risky move on Thursday’s new Y&R episode. During a phone conversation with Ashley, Billy will claim he paid for the yacht himself. He’ll promise to file the invoice soon enough. Later, Billy will produce a yacht receipt with his name on it. He’ll tell Kyle to take the receipt to accounting and have his personal account reimbursed.

It seems Billy’s found a way to score quick cash, but more trouble could be brewing. Billy had better hope his losing streak comes to an end! In the meantime, Neil (Kristoff St. John) will turn on the charm and hope he can woo Ashley. They’ll enjoy a romantic night at Neil’s place until Victor (Eric Braeden) arrives.

Once he’s let in, Victor will chew Neil out for playing dirty. Neil used Ashley’s insider tip to snatch up a Newman contract for Hamilton-Winters. Of course, Neil won’t see the problem. He’ll feel certain Victor would’ve made the same move in that situation.

Victor won’t care about Neil’s excuses, so he’ll insist he won’t be needing Power Communications’ services anymore. After Vic departs, Neil will turn his attention back to Ashley. They’ll slow dance and ultimately share a kiss.

Finally, Victor will get a shocking text. J.T. (Thad Luckinbill) or perhaps his impersonator will want to set up a meeting. He’ll urge Victor to come alone, so this could be one dangerous showdown! We’ll give you updates as other Y&R news comes in. Stay tuned to the CBS soap and don’t forget to check CDL often for the latest Young and the Restless spoilers, updates, and news.