The Young and the Restless Spoilers: Tragic Y&R Preview Promo – Devon Hopes for a Miracle – Lily Begs Hilary for Forgiveness

BY Marcy Cohen on July 20, 2018 | Comments: one comment
Related : Soap Opera, Spoiler, Television, The Young and the Restless 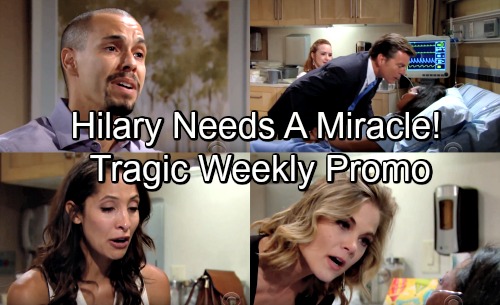 The Young and the Restless (Y&R) spoilers for the week of July 23-27, tease that some horrible news is headed Devon’s (Bryton James) way. He hoped that things were turning around for Hilary (Mishael Morgan), but Nate (Brooks Darnell) will reveal that’s not the case. Hilary’s doctors just can’t get her massive bleeding under control. As a result, Nate will insist that the end is near.

Devon will refuse to believe that, but Nate will try to help him understand. He’ll suggest that nothing and no one can save Hilary. An emotional Devon will share the shocker with Lily (Christel Khalil). He’ll hold out hope for a miracle, but the situation will definitely look grim.

The Young and the Restless spoilers say Lily will pull Devon close before visiting Hilary. She’ll offer an emotional apology and beg for Hilary’s forgiveness. Lily will feel terrible about her harsh statements in the car. She’ll assure Hilary that she would’ve been a great mom.

Lily will wish she could go back to that moment and focus on the road, but Hilary will undoubtedly offer reassurance. They were both fighting, so Hilary will think she’s just as much to blame. It was an accident and that’s that.

Of course, Hilary will get some other visitors as well. Jack (Peter Bergman) will pop in and give Hilary a sweet kiss on the head. Naturally, Mariah (Camryn Grimes) will also have some tender scenes with Hilary. These two tend to bicker most of the time, but there’s a lot of love between them.

Hilary’s bestie, Phyllis (Gina Tognoni), will stop by to deliver a tearful plea. The Young and the Restless spoilers say Phyllis won’t want Hilary to give up. She won’t know what she’ll do if her scheming gal pal doesn’t make it. A sobbing Hilary will promise that she’s going to fight, but there’s only so much she can do. Nate will truly be all out of options.

Later, Y&R fans will see a touching proposal. Devon will tell Hilary that he wants to make her his wife again. He’ll ask her to marry him right away, so they’ll have a small wedding at the hospital. It’ll warm Hilary’s heart, especially since she’ll know these could he her final hours.

Unfortunately, Y&R buzz hints that Hilary will indeed die from her injuries. It hasn’t been confirmed just yet, but this certainly seems like Hilary’s tragic farewell. We’ll give you updates as other details emerge. Stick with the CBS soap and don’t forget to check CDL often for the latest Young and the Restless spoilers, updates, and news.