BY Heather Hughes on July 28, 2018 | Comments: one comment
Related : Soap Opera, Spoiler, Television, The Young and the Restless 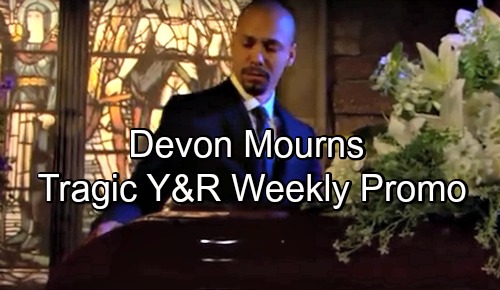 The Young and the Restless (Y&R) spoilers and the new weekly promo video for the week of July 30-August 3 tease that Devon (Bryton James) will face a tough task. It was hard enough to say goodbye to Hilary (Mishael Morgan) in the hospital, but Devon still has one more farewell left. He’ll say a more final one after Hilary’s funeral gets underway.

Y&R fans can expect a difficult service pretty soon. Devon will look glum as he walks around Hilary’s casket and gently touches it. He’ll have to accept that this is really happening. Devon’s never going to see Hilary again and that’s truly devastating. He’ll put on a brave face for a while, but it won’t be long until his world comes crashing down.

The Young and the Restless spoilers say Devon’s anger will eventually boil over. He’ll lash out at Lily for causing the tragic crash. Devon will point out that Lily wanted Hilary out of his life and thanks to this accident, she got her wish. He’ll be fed up and looking for someone to blame for his pain.

At that point, will Devon know about Lily blowing through the red light? It might be interesting if Devon exploded before he got the news. He’ll be struggling with intense grief, so it’d be reasonable for him to blast the driver of the car. Devon could make amends only to have a bigger blowup when he realizes Lily legitimately did cause the crash.

Lily certainly had issues with Hilary, but she never would’ve wished death on her. She’d do anything to take back the events of that fateful day. However, it’s much too late for that. Lily will beg Devon not to let this come between them, but he’ll just walk away in disgust.

Later, Devon will deliver a heartbreaking ultimatum. He might want to cut all ties with Lily, including her modeling agency through Hamilton-Winters. Devon could suggest that Lily needs to stay away from him or else he’ll press charges. Their relationship is definitely going to change forever this week.

Other Young and the Restless spoilers say Phyllis (Gina Tognoni) will offer Nick (Joshua Morrow) a warning. She’ll point out that that their little secret isn’t so secret anymore. Y&R viewers know Nick and Phyllis hooked up, so that scandal’s just waiting to erupt.

Kyle (Michael Mealor) is in the loop and Summer (Hunter King) will be digging for dirt. That could be a recipe for disaster. Y&R’s weekly promo also shows Nikki (Melody Thomas Scott) grilling Phyllis. She’ll wonder what unforgivable thing Phyllis has done now.