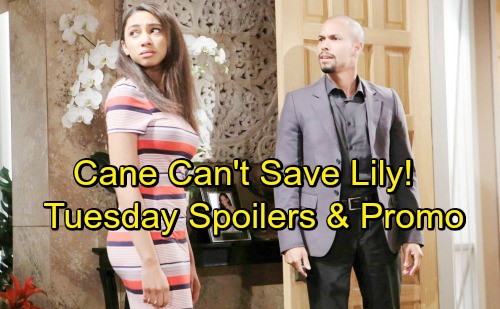 The Young and the Restless (Y&R) spoilers for Tuesday, August 7, tease that Ashley (Eileen Davidson) will return from her business trip. She’ll get updates on all the latest Hilary (Mishael Morgan) drama and decide to visit Neil (Kristoff St. John). Ashley will realize the whole family’s going through a rough time. She’ll want to offer some comfort and help Neil deal with his struggles.

Of course, Ashley doesn’t know just how dire the situation is. If Lily (Christel Khalil) turns herself in, she could end up doing major time behind bars. Devon (Bryton James) isn’t backing down, so Neil may open up about his fears. Since he trusts Ashley, maybe Neil can use this as a chance to let his walls down. He’s been trying to stay strong for Devon’s sake, but he’s clearly hurting as well.

Will this push Ashley and Neil toward a romance after all? They determined it was best to remain friends, but they’ll definitely get closer soon. Perhaps they won’t be able to stop their growing connection. If this keeps up, Neil and Ash should really revisit the idea of a renewed relationship.

Meanwhile, Cane (Daniel Goddard) will make a last-ditch effort to stop Lily’s confession. He’ll hope he can convince her to steer clear of the police station, but he won’t be able to. Lily will feel like this is the only way to satisfy Devon. Furthermore, it may be the only way to deal with her guilt!

The Young and the Restless spoilers say Lily will indeed come clean to the cops. Devon will be pleased by the news, but it won’t be enough. He won’t stop fighting until Lily’s stuck in prison. Y&R fans can expect even more mayhem for this distressed family, so stay tuned for all the drama.

Elsewhere, Lauren (Tracey E. Bregman) will catch Jack (Peter Bergman) off guard. She may track him down for a business meeting on Tuesday. Lauren isn’t happy about the way Billy’s (Jason Thompson) running Jabot. She’ll most likely get a whiff of the new trouble that’s brewing.

Billy’s cooking up a deal that will hurt Fenmore’s, but Lauren won’t be fully in the loop yet. However, that won’t stop her from taking precautions. Lauren may see what Jack has to offer at Dark Horse. Nick (Joshua Morrow) would be willing to snatch Fenmore’s up, so Lauren might as well consider the idea.