BY Heather Hughes on December 9, 2018 | Comments: one comment
Related : Soap Opera, Spoiler, Television, The Young and the Restless 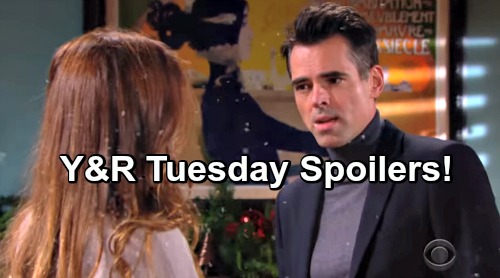 The Young and the Restless (Y&R) spoilers for Tuesday, December 11, tease that Jack (Peter Bergman) will be on a bold mission. He’ll have something daring up his sleeve and it just might involve Kerry (Alice Hunter). Jack certainly enjoys Kerry’s company, but he’s looking for more than just friendship and casual chats. He’s eager to kick off a real romance, so he’ll have to step up his efforts.

Kerry is trying to be cautious with her heart, which could make Jack’s plan a bit tougher. She admitted that she’s struggled to find “the one” in the past, so she may not think Jack will fit the bill either. However, Kerry can tell that Jack’s a good guy and she seems to feel a spark. Jack just has to hang in there and show Kerry that he’s worth the risk.

While Jack carries out his latest plan, Phyllis (Gina Tognoni) will leave Nick (Joshua Morrow) in the dark. On Monday’s new Y&R episode, December 10, Phyllis fibs about going to the office and ends up meeting Billy (Jason Thompson) elsewhere. Thankfully, Phyllis doesn’t cheat behind Nick’s back. She actually sets distinct boundaries for once and makes it clear that Billy’s in her rearview mirror.

It’s hard to believe Phyllis and Billy are through forever, but she’s definitely done for now. Nevertheless, Phyllis may not want to share the details of this conversation on Tuesday. She won’t want to rehash the past or create unnecessary insecurities. Nick wouldn’t like it if he knew Billy wanted Phyllis back, so she’ll probably keep that tidbit to herself.

Other Young and the Restless spoilers say Reed (Tristan Lake Leabu) will come home with big news. He’ll be back in Genoa City to get to the bottom of J.T.’s (Thad Luckinbill) death and seek justice. Victoria (Amelia Heinle) will get nervous as Reed’s rage grows. She’ll fear that her son could be the undoing of the cover-up crew!

Reed’s anger will die down a tad when he learns J.T.’s body is missing. Unfortunately, it won’t take long for it to rev right back up. Reed will learn Grandpa Victor (Eric Braeden) is the prime suspect later this week, December 10-14, so that’s sure to leave him furious.