The Young and the Restless Spoilers: Tuesday, December 18 – Emergency Surgery for Nikki, Nate Fights to Save Her – Victoria Leans on Billy

BY Heather Hughes on December 14, 2018 | Comments: one comment
Related : Soap Opera, Spoiler, Television, The Young and the Restless 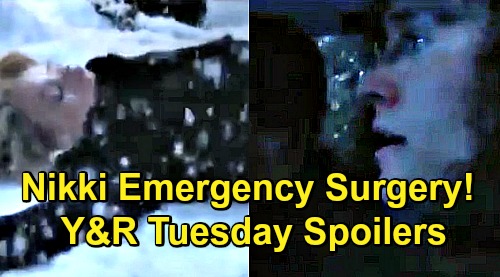 The Young and the Restless (Y&R) spoilers for Tuesday, December 18, tease that Nikki’s (Melody Thomas Scott) unconscious body will be discovered in the snow. A random Genoa City resident will happen to pass by and see her there. Naturally, paramedics will be called right away. Nikki will get the help she needs, but it’ll definitely be a critical situation.

Once Nikki arrives at the hospital, Nate (Brooks Darnell) will recognize her and leap into action. He’ll be determined to save Victor’s (Eric Braeden) wife, but he’ll have his doubts deep down. Nate will realize Nikki has severe internal injuries, so she’ll be rushed into emergency surgery. There’ll be no time to waste!

The Young and the Restless spoilers say Nate will use all his skills and pour his heart into it. He’ll hate the idea of losing another patient like Hilary (Mishael Morgan), so he’ll work hard to save Nikki’s life. Meanwhile, Victoria (Amelia Heinle) will be a mess over her mom’s horrible ordeal. She’ll have no idea that her own son caused it!

Of course, Reed (Tristan Lake Leabu) won’t know that either just yet. That’s something that won’t click into place until later. Whenever Reed is finally brought in the loop on Nikki’s accident, he should feel a knot in the pit of his stomach. Reed will inevitably recall hitting something with his car, so he’ll worry about Nikki – and about what’ll happen if he gets caught.

Back with Victoria, she’ll embrace Nick (Joshua Morrow) as they try to get through this mess. Billy (Jason Thompson) will also give out plenty of hugs. He’ll want Victoria to know he’s got her back now and always. They may be exes, but their bond has never really gone away.

In fact, Y&R could be gearing up for a reunion between these two. Victoria will definitely lean on Billy during this awful crisis. The Young and the Restless spoilers hint that love could bloom again, so we’ll see where this leads.

Elsewhere, Kerry (Alice Hunter) will discover some intriguing tidbits regarding Jack’s (Peter Bergman) history. She’ll be taken aback by some of the things Jack’s done over the years. Kerry may gain more insight into Jack’s love life as well, but she probably won’t be scared off. Their connection is growing stronger, so Kerry seems all in on giving Jack a chance.

Y&R fans will want to check out Tuesday’s exciting episode. We’ll give you updates as other news comes in. Stay tuned to the CBS soap and don’t forget to check CDL often for the latest Young and the Restless spoilers, updates and news.