The Young and the Restless Spoilers: Tuesday, February 13 Update – Chelsea Rages At Nick – Victoria and Jack Team Up 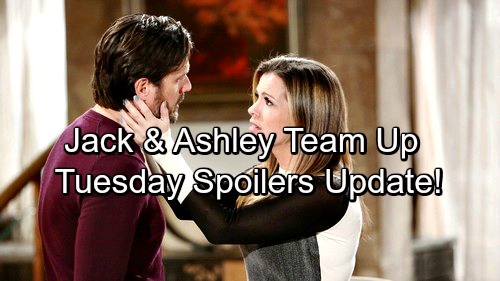 The Young and the Restless (Y&R) spoilers for Tuesday, February 13, tease that Victoria (Amelia Heinle) will remain worried about the threat Ashley (Eileen Davidson) poses. She’ll talk to Victor (Eric Braeden) about her persistent concerns, but he’ll dismiss them. Victor will be confident that his new hire will work out well for Newman.

Meanwhile, Jack (Peter Bergman) will fill Ashley in on her replacement. Ash will snap that Jack must be glad Helen (Sitara Hewitt) isn’t a blood Abbott either. Elsewhere, Victoria will track down Billy (Jason Thompson) and ask for the scoop on Ashley’s beef with Jack. Billy (Jason Thompson) won’t divulge much, but he’ll admit Jack’s hoping Ashley will return to Jabot.

Once their conversation’s over, Billy will head to Top of the Tower with Ashley. They’ll be surprised to see Jack and Helen there. The Young and the Restless spoilers say Ashley will march right over to wish Helen good luck. Privately, Ashley will fume over everything Jack’s done. She’ll tell Billy that their brother’s going to be sorry.

Y&R spoilers state that Victoria will have a proposal for Jack later. Since he wants Ashley back at Jabot and she wants her out of Newman, Victoria will think they should strike a deal. She’ll suggest they should team up to make their goals happen.

At Crimson Lights, Phyllis (Gina Tognoni) will bring Billy up to speed on Lauren’s (Tracey E. Bregman) meeting with Victor. Once Billy hears that Victor’s connected to this, he’ll worry about Phyllis stirring up trouble.

After Nick (Joshua Morrow) has some sexy fun with Chelsea (Melissa Claire Egan), he’ll meet up with Phyllis. Nick will want to call off the whole investigation. Phyllis will ask for 48 hours to find some answers and Nick will give her the green light.

Once Nick’s gone, Phyllis will chat with Sharon (Sharon Case) for a moment. When they discuss the cash serial numbers, Phyllis will get an idea. She’ll think she’s found a way to take Chelsea down. Phyllis will find Lauren and ask to borrow some of the money. She’ll hope J.T. (Thad Luckinbell) can prove her hunch since he has GCPD contacts.

Phyllis seems to think she can follow the trail that led to Victor and hopefully trace it back to Chelsea, too. Back at the coffeehouse, Chelsea will waltz in and learn something unsettling from Sharon. She’ll realize that Nick met up with Phyllis, so she’ll definitely be anxious over the news.

Back at home, Chelsea will confront Nick about his secret meeting. He’ll confess that he’s still rattled about the Chelsea 2.0 scam. Nick will ask Chelsea to tell him she didn’t do it, but she’ll just lash out. Chelsea will argue that Nick’s lack of trust means they probably shouldn’t be together.