The Young and the Restless (Y&R) spoilers for Tuesday, January 9, tease that Sharon (Sharon Case) and Abby’s (Melissa Ordway) fight will still be the talk of the town. Victoria (Amelia Heinle) will be glad it didn’t turn into a huge story. Devon (Bryton James) will point out that Hilary’s (Mishael Morgan) trying to focus on positive scoops, so that undoubtedly helped.

Meanwhile, Hilary and Phyllis (Gina Tognoni) will ponder why Scott (Daniel Hall) caused so much drama. They’ll struggle to see why he was worth fighting over. Elsewhere, Scott will have a business proposal for Devon. After a solid pitch, Devon will contemplate the idea of buying Hashtag. 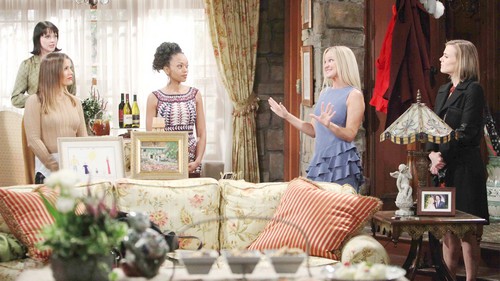 Other Young and the Restless spoilers say Mattie (Lexie Stevenson) will worry about Reed (Tristan Lake Leabu) shutting her out. J.T. (Thad Luckinbell) will note that Mattie did the right thing by calling the cops. He’ll praise her bravery. Cane (Daniel Goddard) will contend that it’s Reed’s problem if he can’t deal with it.

Afterward, J.T. will blast Cane for continuing to think the worst of Reed. He’ll argue that Reed’s an unruly teen, not some murderer. Talk will turn to Mac’s (Clementine Ford) decision to file for divorce. That’ll lead to Cane’s concerns about Lily’s (Christel Khalil) trip to Paris.

Y&R spoilers say J.T. will feel like Cane’s being a baby about all of this. He’ll think Cane’s just letting his insecurities get the best of him. Later, J.T. and Charlie (Noah Alexander Gerry) will try to help Mattie make peace with Reed. She’ll insist that she couldn’t bear the thought of losing him, but Reed will snap that she lost him in a different way.

At Newman Enterprises, Devon will stop by to discuss Scott’s proposal. Victoria (Amelia Heinle) will state that Hashtag’s not for sale. Abby will also have a chat with Lily (Christel Khalil) at Newman. They’ll discuss Paris, which Lily won’t be sure about. This might be her last shot at repairing her relationship with Cane.

At Crimson Lights, Sharon will enthusiastically invite Chelsea (Melissa Claire Egan) and Mariah (Camryn Grimes) to a party. She’ll be anxious to prove she’s doing just fine. Sharon will call Hilary up and urge her to spread the good news.

Hilary will ask Phyllis to join her at this shindig, which will certainly spark some conflict. For starters, Mariah will be irked when Tessa (Cait Fairbanks) appears. Sharon will also question Hilary’s decision to bring Phyllis. Of course, Hilary and Chelsea will struggle to get along as well.

Abby will add to the awkwardness when she arrives to make a heartfelt speech. She’ll be truly sorry for what happened with Scott (Daniel Hall). Sharon will decide to accept the apology, but she’ll warn that Abby isn’t coming to her next gathering.

Back with Cane and Lily, they’ll face a misunderstanding. Lily will look for Cane at the Chancellor mansion while he searches for her at Newman. These two struggle constantly, but better days are ahead. We’ll give you updates as other Young and the Restless details emerge. Stick with Y&R and don’t forget to check CDL often for the latest Young and the Restless spoilers, updates and news.