The Young and the Restless Spoilers: Tuesday, July 3 Update – Hilary Spies On Nate – Phyllis Throws Nikki Under The Bus

BY Heather Hughes on July 2, 2018 | Comments: one comment
Related : Soap Opera, Spoiler, Television, The Young and the Restless 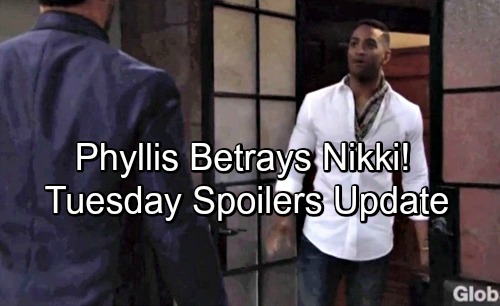 The Young and the Restless (Y&R) spoilers update for Tuesday, July 3, tease that the cover-up gang will run into a large, artsy problem. A sculpture will be firmly in place over the spot where they buried J.T. (Thad Luckinbill). Thanks to the concrete below it, there’ll be no way to dig up the body.

Victoria (Amelia Heinle) will contend that without evidence, they need to assume J.T.’s still out there. Since this is a high-stakes situation, Nikki (Melody Thomas Scott) will offer a stern warning. If one of them gets caught, they’ll all pay the price.

Later, Phyllis (Gina Tognoni) will have a shocking suggestion for Sharon (Sharon Case). She won’t believe J.T.’s really alive, but she’ll have a plan in case he is. J.T. probably didn’t even know the two of them were involved. She’ll think they should form a new alliance and try to wiggle out of this mess.

Phyllis will want the blame to fall solely on Nikki, but Sharon will think they should honor their four-way pact. At the athletic club, Nikki and Victor (Eric Braeden) will defend their health to the social worker. After Nikki talks about controlling her MS, Victor will have to discuss his own condition. Nick (Joshua Morrow) will waltz over to drop a hint about the GC Buzz shocker.

Victor will insist that the incident was nothing. He’ll downplay the recent expose as well and hope it’s enough to appease the social worker. At Hamilton-Winters, Neil (Kristoff St. John) will get a blast from the past. Brooks Darnell will make his first appearance as Dr. Nate Hastings, Jr. Once Neil spots him, he’ll give Nate a warm hug and invite him back to the penthouse.

Hilary (Mishael Morgan) and Tessa (Cait Fairbanks) will spot the guys leaving, so they’ll wonder who the mysterious hunk is and what he’s up to. Afterward, Hilary will knock on Neil’s door to get more info. A shirtless Nate will answer, but he won’t exactly make a good first impression.

Hilary will feel like he’s being rude, so she’ll storm off. A little later, Hilary will come back to give Nate a piece of her mind. Luckily, Neil will be there to handle the drama. He’ll introduce Nate and get rid of Hilary as fast as he can. Once the coast is clear, Victor (Eric Braeden) will show up. He’ll want Nate to sign a non-disclosure agreement and become his secret doctor.

However, Y&R spoilers say Nate will want to do this on his terms. He’ll need to examine Victor and secure a promise for complete honesty. Before he takes Victor on as a patient, Nate has to know exactly what he’s dealing with. He’ll add that Victor will have to come up with plenty of money, but that’ll just earn Victor’s respect.

After their meeting wraps up, Victor will fill Nikki in. She’ll continue to fret over the J.T. chaos, but Victor will vow to take care of their family. Back with Hilary, she’ll make an intriguing phone call. The Young and the Restless spoilers say Hilary will want the scoop on Nate. She’ll urge someone to get a file containing all available info.